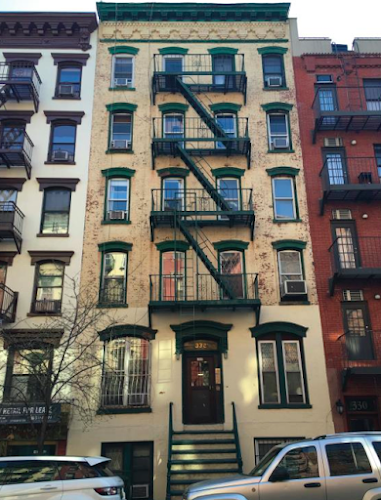 The 6-story walk-up building at 332 E. Sixth St. between First Avenue and Second Avenue is back on the sales market.

Here's part of the listing, via Cushman & Wakefield:

The entire building underwent a gut renovation in 2016 that included the build out of an expansive resident accessible rear deck space, upgraded common areas, and fully updated mechanicals. Current ownership also has approved plans for a restoration of the facade from Landmarks they are currently undergoing.

The apartments feature Chef's range kitchens, custom granite countertops, dishwashers, stackable washers/dryers, wide plank oak floors, and custom lighting. 8 of the units are 3-BRs and 4 are 2-BRs. Upon being renovated, the units were leased immediately at near market rents showing the high demand for apartments in the immediate vicinity. Furthermore, each unit has a gas boiler (tenants pay) reducing operating expenses in perpetuity. There is potential upside in the RS units along with adding an an addition using the 2,950 SF of air rights subject to Landmarks approval.

This is a great opportunity to acquire a low maintenance and high cash flowing multi-family asset in the heart of the East Village.

In early 2016, presumably pre gut renovation, the building was seeking $8 million. At that time, of the 12 units, nine were empty and three were rent-stabilized.

Public records show that Raphael Toledano's Brookhill Properties bought the building in January 2016 for $4.5 million. (This was owned by the Tabak family, though not part of the larger portfolio they sold to Toledano.)

As previously reported, Madison Realty Capital has replaced the controversial landlord as the property manager of his remaining East Village buildings while a deal to transfer the ownership is worked out.
Posted by Grieve at 4:05 AM