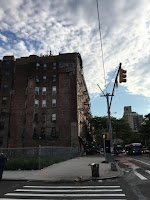 Victims of the deadly Second Avenue gas explosion are now looking to freeze the assets of former landlord Maria Hrynenko, who last month sold two of the three properties destroyed in the blast on March 26, 2015.

The Post today reports that Hrynenko and her companies have been hit with 28 lawsuits.

The legal motion asks that a judge forbid Hrynenko from “removing, destroying, selling, assigning, gifting, encumbering and otherwise disposing” of cash from the sale.

As I first reported in June, Shaky Cohen's Nexus Building Development Group, Inc., paid $9.15 million for both lots — 119 and 121 Second Ave. To date, there haven't been any new permits filed at the DOB.

The DA charged Hrynenko and several others, including her son, with involuntary manslaughter and other alleged crimes. The criminal case against her has yet to go to trial while the multiple civil actions are still making their way through the courts.

They need to freeze these assets before these people all disappear. They are facing serious jail time and could use the money to flee abroad. Our system favors those with cash over the vctims with limited resources anyway, and with that kind of cash she could tie this up in court for years. In the meantime Maria might want to use the money get some work done on that face, she is not aging well under the circumstances.

Then get the courts to move this along, so that all those affected can get justice without having to wait for decades.

The new owners should not be penalized and should be allowed to move forward unencumbered so that the EV can benefit. But the former owner should not receive a single penny free and clear. The money should be in an escrow account until all lawsuits are either settled, tried or dismissed. Perhaps for once, some sense of justice might be had, if not closure for the friends and families of the two young men who unnecessarily lost their lives.

it's been over two years, some reason this case isnt in court yet? what a joke.

How do we move forward and the neighborhood benefit by having new presumably luxury housing in this site? Where is the justice for the people who were displaced and the two people killed? A developer who paid 9 million dollars is not helping us move forward.