The Bean is opening in the former St. Mark's Bookshop space at Cooper Union 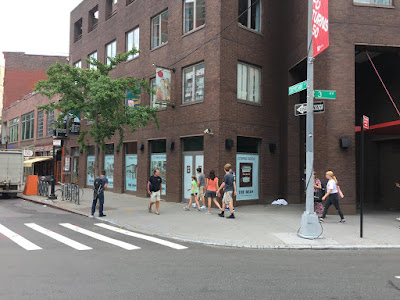 The Bean is opening a new location at 31 Third Ave. at Stuyvesant Street ... an EVG tipster sent along these photos from yesterday... the signage shows The Bean @Cooper Union... 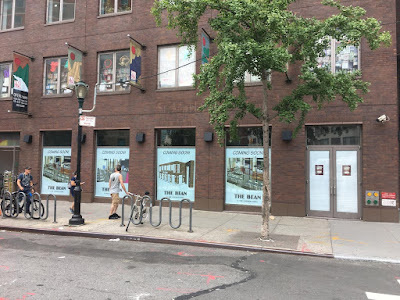 The storefront has been empty ever since St. Mark's Bookshop moved out in June 2014. There have been a few art shows here, which makes sense given that Cooper Union owns the building.

"We've always liked the old St. Mark's Bookstore spot and it's been empty for years, so when the opportunity presented itself for us to obtain it we were excited to make it happen," Ike Escava, owner of the Bean, told me via email.

This will make the coffee shop/cafe's fifth location, joining the other East Village locations at Second Avenue and Third Street and Ninth Street at First Avenue. The other locations are at Broadway and 12th Street and Bedford Avenue in Williamsburg.

If all goes well, then Escava said that he'd like to be open around Labor Day.

St. Mark's Bookshop had been struggling to stay in business here. In November 2011, then-Manhattan Borough President Scott M. Stringer helped broker a deal between the Bookshop owners and Cooper Union in which the school agreed to lower the rent by $3,000 to $17,000 and forgive $7,000 in debt. The shop moved to a much smaller space on Third Street with four years remaining on the least at 31 Third Ave.
Posted by Grieve at 4:31 AM

Email ThisBlogThis!Share to TwitterShare to FacebookShare to Pinterest
Labels: 31 Third Ave., the Bean

Another place to buy coffee. Jesus tapdancing Christ. That means more dipshits walking
around aimlessly with venti cups in their hands

Pulled an all-nighter and just walked from my office @ 17th St & Bway to home @ 2nd Ave & 5th St. At 6:30 AM, I counted 14 specialty coffee shop options, 6 coffee carts. I didn't bother to count Bagel Cafe, Dunkin Donuts, bodegas or other breakfast options that were open. Several of the coffee places were less than a block apart (like Southern Cross and Coffee Project). Maybe there are still blocks further east that are lacking coffee options but I sure would have liked to see something else come into this space.

Excellent. It's a perfect layout for a coffee shop, not so much for a bookstore.

The coffee thing is getting pretty crowed in the EV.

The Bean apparently knows how to run a coffee place. Lots of fairly comfortable seats, panoramic views, good coffee, come and go as you please, neighborhood vibe, though my reading room of choice is 9th Street Espresso, which still makes great cappuccino after all these years.

Nothing against the Bean, but this is a disappointment and not really needed. How many coffee places do we really need? Isn't the Mud nearby? Like, just steps away?

It's a shame Cooper didn't do something more interesting with the space. Those "art" shows didn't express much of anything for such a storied art, engineering and architecture school with what are purportedly our best and brightest students in the U.S. Where are they? Where is the art?

We have lost our imagination in nyc, it seems. All I can say is 'Meh'. This new store doesn't even translate into jobs unless you're a "proven" barista. THE BEAN IS too lazy to train anyone with less experience; I asked because I live here and I need (another) job to keep up. Learning how to use a coffee machine and make designs in foam can't be that hard. Why treat it so preciously? People need to work. Making a good cup of coffee isn't rocket science and shouldn't be treated as such. Former professional white collar folks who would like to return to some sort of work NEED A CHANCE TO DO THAT. Remember, BEAN, these are your neighbors.

It is great to hear that a well regarded, locally owned business is taking the space. Hard to believe that the EV no longer has a book store. Yes, there are the few used book stores left but the fact that there is no EV Books is a sin.

If that space has been empty and for rent since 2014 does that mean that Cooper Union also has absurdly high commercial rents?

That would have been a great space for M2M...

As much as I like The Bean (I frequent the 12th and Broadway location, though I've stopped in the other two when I'm in the area), and the fact that they're open relatively late, I have to agree that this is a lot of coffee in a small area. Being open late, they may also have to deal with drunk crowds from around the corner on weekends.

Isn't the Bean the place where they wouldn't let an old guy sit on the bench in front of their storefront because he didn't buy anything? Turned out he was feeling weak or something and had to sit down for a bit and they acted like dicks.

As for yet another coffee place---meh--like some posters say above. Why can't we get more basic services like shoe repair? I still miss David's on 7th.

I see very little difference between The Bean and Starbucks.

I personally am just happy that isn't a HSBC or 7-11. There may be a lot of coffee shops in the East Village but I'd far prefer the Bean to a national chain or a sports bar filled with obnoxious NYU students.

What was it that Cuzzo said about Starbucks opening on Ave. A: "But it’ll disappoint those who perversely preferred the neighborhood of 30 years ago, when it was better known for crack than for coffee."

Well, coffee is the new crack.

Too much coffee! Now too much ice cream! Two new ice cream shops on Ave A only one business in between the two!
Maybe there's nothing new on the planet.

So the Bean will be in a direct line from Starbucks @ 9th and 2nd to the Bean @ 3rd Ave and Starbucks @ Astor Place, only interrupted by Blue Lane @ 4th Ave between St Marks and 9th St...three locations in the EV does make it appear they aspire to be Starbucks..

So there's the "not-another-Starbucks" protest but people are cheering for The Bean? I mean...what's the difference? Might just as well be a WeWork space.

'can't see the difference between starbucks and the bean'
'we need a shoe repair'
REALLY........!

if you can't tell the difference between the bean & starbucks i've got a bridge to sell you.

At one point it was supposed to be a center for street people. The Bean is a way better option. And the coffee is good and they put people to work. So what if there are a lot of coffeehouse. That's not our problem. It's there's.

I like the Bean and am happy they are doing so well and able to expand.

That said, I've always thought it strange that Cooper Union didn't use this space to showcase their student work. It's an art and architecture school - this would be a great opportunity for a bookstore geared towards those subjects and a place to display their work.

Then again, CU didn't even employ their own graduates to design their new building, so maybe they don't really care about their students.

I must be some kind of freak I seldom drink coffee outside of my kitchen at breakfast.

coffee is coffee and I agree with the last comment, I drink coffee at home in the morning and maybe a cup in the office on a bad day. Coffee kooks.

Anon @3:40 What are you smoking? Keep the former owners of St Marks Book Store away except as customers. They drove their business into the ground and snookered people into helping them with money as they stiffed their workers by not paying appropriate taxes. If you want a book store with a coffee space go to McNally Jackson.

Here is my problem with The Bean on 2nd Ave. Walk in, everyone looks like they are camping out at their seat. Many with laptops, some with their own light. Charging their phone. I make my order hoping someone will leave so I can sit at a table and eat. Nope. I go to the bathroom and come back, Nope. I look about the room. Is anyone actually eating or drinking? Nope. How do they make any money? Maybe it is the busy time of the day.

The Bean is the new Starbucks. No personality and soulless. Does no one remember when the whole neighborhood threw a hissy fit when Starbucks forced em out of their original location? Now they're one and the same. Nothing neighborhoody or charming about this place. Thank god for Mud.

Forget it, Jake. It's Coffeetown.

BAD MOVE!!!! That's REWARDING the scumlord for booting St. Marx Books in favor of an EMPTY space for more than 5 years, leading to the demise of that long-term local business.

This FOR-PROFIT college, which has BETRAYED Peter Cooper's mission, will screw The Bean AS WELL. It's only a matter of time.

7/13 11:39am has a point regarding the venti-clutching, earbud-wearing, sidewalk daydreamers and dawdlers of today's NYC streetscape. They fill the physical space formerly occupied by crackheads and, like crackheads, they're in their own world, frequently in the way and stubbornly oblivious to social cues. At least they don't break into cars to steal loose change and cassette tapes.

I'm in the "belly of the beast" as I write. Coffee is okay but the staff is a little cold. Please don't take my money, look the other way and don't acknowledge my me. Oh well, back to Mud.