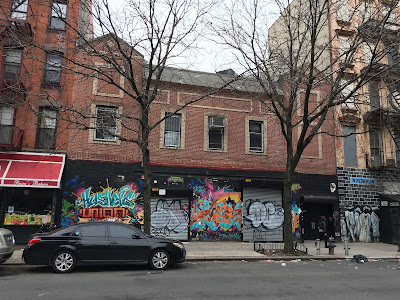 Permits have been filed for a 7-floor residential building at 238 E. Third St. between Avenue B and Avenue C.

Here's more from New York Yimby, who first reported on the development:

The new structure will be designed by Vikatos Architect, and will comprise a total of 20,928 square feet of living area with a total built-up area of 27,657 square feet.

The building will rise seven floors above ground to 75 feet, with additional cellar living area and a basement. 20 rental units are planned, in total, putting the average unit at about 1,046 square feet.

The building, which the Blue Man Group owned at one point for use as a practice facility, hit the market last September with a $12 million ask.

The listing noted at the time: "This is an excellent opportunity for a developer to acquire a 50’ wide development site in the East Village. In addition, considering how unique the building is, the offering presents an incredibly rare opportunity in which the current building and configuration could be maintained for a user."

Given the new-building specs, it appears that the current structure will come down, though demo permits haven't been filed yet.

In a previous life, the building served as a movie theater. Public records from July 2017 list two of the founders of the Blue Man Group — Chris Wink and Philip Stanton — as the previous owners, who received $18.6 million for this and another LES property.

Per NYY, Vinbaytel Property Development is the new owner of No. 238. Vinbaytel has developed several East Village condos in recent years, including at 227 E. Seventh St., 67 Avenue C and 26 Avenue B.
Posted by Grieve at 4:30 AM

Converting this from commercial to residential seems like a good use of the space. Hopefully it's not all glass though.

Now can someone please buy and tear down the building on the Northeast corner of Houston and B?!

That building is a giant cell tower these days

@12:34, it has been vacant for 20+ years (in the residential piece) and has had scaffolding in place for ~10 (I think?) years because it had bricks falling off. So, because it doesn't add value to the neighborhood, it doesn't have tenants, it's dangerous, it's ugly?

I envision these units going for 10k a month or priced at 1.5 million for the space. Only in NY kids, Only in NY.

Well, I'm kind of relieved they're not demolishing number 242—yet—the current home of Rossy's Bakery, but the long-ago home of Slugs' Saloon, where "tough-sounding" jazz played.

Slug's Saloon, where famed jazz trumpeter Lee Morgan was shot and killed by his wife Helen when she found him with another woman. (I just watched the documentary "I Called Him Morgan", there's great footage from inside the club.)

Well, I'm torn about this.
I live directly across the street from this great old building.
I will probably lose the sunshine in my 3rd floor street facing apartment.
been here for 24 years, sad to see a great old building go,
but, maybe there will be retail non the ground floor?
And maybe the street will be better kept up?