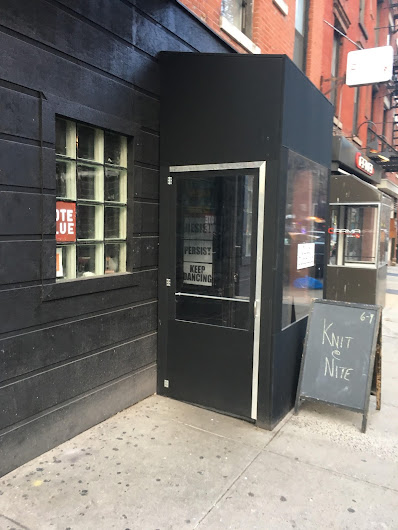 It was standing-room only — even on the sidewalk outside — at Monday night's CB3-SLA committee meeting at the Perseverance House Community Room, 535 E. Fifth St. between Avenue A and Avenue B.

Several dozen supporters showed up at the meeting — so many that CB3 reportedly asked people to wait outside the Perseverance House Community Room...

Here's a recap via Bedford + Bowery:

Ultimately, CB3’s SLA and DCA four present committee members did vote unanimously to grant the license alteration, which would allow live music and DJs “provided they are not scheduled and that there are no ticket sales or entrance fees.” The committee stated this was because the bar’s zoning “does not provide” for them, and they lacked the power to change that.

“The bottom line is how [the Department of Buildings] interprets it,” stated District Manager Susan Stetzer. Historically, [committee chair Alexandra] Militano added, the DOB has not allowed scheduled performances and ticketed events to exist in a residential area, even at spaces licensed to have live music and DJs. Club Cumming’s address, 505 East 6th Street, is in zoning area R7B, a type of “residential district.”

Last night our community board approved the change to our license so that live performance and DJs can happen again at @clubcumming. Now we just have to have the actual license changed by the State Liquor Authority and the show can go on again! It was a truly humbling and beautiful thing to see so many people turn up and show their support for our little bar, and to hear those who spoke express how important it has become as a safe community gathering place that both nurtures new talent and celebrates the artistic and cultural legacy of the East Village.

You can read coverage via Patch here.
Posted by Grieve at 4:01 AM

how do you have live music without scheduling?

And yet they couldn't grant a liquor license to Sunshine Cinema, in a relatively underpopulated area, so people could drink within the confines of a movie theater? WTF?

They can offer live music but they cannot schedule and advertise certain acts to promote attendance for such. So when/if you go, you will see what is going on that night, 80s DJ to cabaret and all in between. It probably helps a place like Club Cumming's allure, I have heard it is great from all very positive vibes, and yes yes I hope its not too loud for people nearby....

To cmarrtyy — he lives in the East Village. Even says so in the post.

I'm happy that everything worked out for them. CC is host to a lot of talented performers and very inclusive of everyone in the LGBTQ community.

I get the "no cover" policy (mucks up the operations; lines out the door), however, not being able to calendar out performers for the public seems like a lose-lose-lose for the performers, bar and community members. Hopefully CB3/City can look the other way.