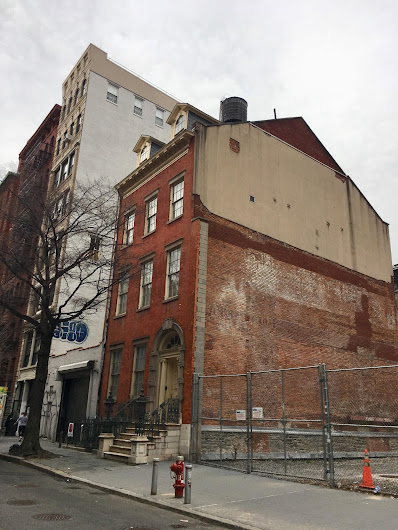 Nearly four years have passed since we heard much about the proposed 8-floor hotel at 27 E. Fourth St. — next door to the Merchant’s House Museum here between the Bowery and Lafayette.

In April 2014, the Landmarks Preservation Commission approved plans for the hotel. Now the City Planning Commission has received the developer’s application for the special permits they need to begin construction.

Tomorrow night, Community Board 2 is holding a public hearing on the proposed construction. The meeting starts at 6:30, NYU Silver Building, 32 Waverly Place, Room 520.

This development is of grave concern to preservationists, not to mention the leadership of Merchant's House, the circa-1832 building that is a city, state and federal landmark. (It is one of only six residences in NYC that is both an exterior and an interior landmark.)

However, landmark status does not guarantee protection from adjacent construction, and Merchant's House officials are worried that the ensuing excavation and subsequent work will damage their building.

Merchant’s House has issued a call to action (read that here):

• The proposed hotel, at 100 feet tall, is in violation of the City’s Zoning Resolution. The developer’s application for a zoning text amendment – “spot zoning” – in effect would rewrite the law for a series of waivers that benefit the developer alone.

• At eight stories, the proposed hotel towers over the 4 ½ story Merchant’s House (completely blocking sunlight to the rear garden) and is grossly incompatible with the surrounding buildings in the Noho Historic District.

• If the Planning Commission approves the application, the developer would be able to proceed – and the museum’s fragile, 186-year-old building would suffer catastrophic structural damage and likely collapse during construction.

• The Merchant’s House is New York City’s only family home preserved intact, inside and out, from the 19th century. It is a vital – and irreplaceable – New York City cultural institution, open to the public since 1936.

If the Merchant’s House — Manhattan’s first designated landmark in 1965 — can’t be protected, NO New York City landmark will be safe from out-of-control private development.

For their part, as Curbed has reported, the developers have promised to take extensive measures to ensure that the neighboring structure will not be harmed.

Over an 18-month period, architect Ed Carroll presented three different designs to the LPC before receiving the OK in 2014. The hotel is still apparently underwhelming. Per Curbed:

"Yeah, the building is boring, but it's appropriate," said Commissioner Michael Goldblum. The other Commissioners concurred, for the most part, that the new design featuring beige brick, glass, and metal spandrels, met the basic requirements they had set out for it. The only Commissioner to vote against the proposal, Margery Perlmutter, called it "drab on so many levels." "I feel like we've been exhausted into saying yes to this proposal, so I'm saying no," she said. 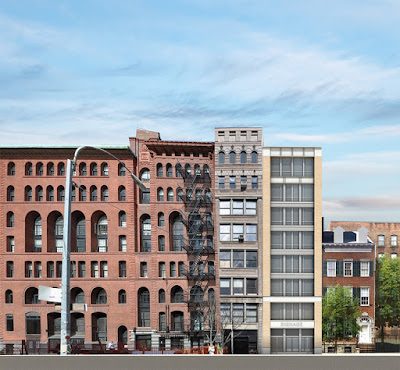 [Via SRA Architecture and Engineering] 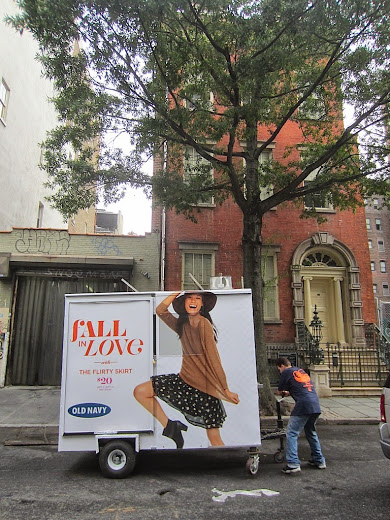 Plans filed for new 8-story hotel next to the historic Merchant's House Museum on East 4th Street
Posted by Grieve at 4:30 AM

So where will all the carts go? Are they going to have now be trucked in everyday, next to the citibike shifters, adding to the noise and pollution of this metropolis?

Is that an ad trailer I see? I hope that was just there temporarily. Get that blatant billboard BS outta here.

This hotel endangering Merchant House is all by design. Build it, fuck up MH, then MH has to be demolished to make way for another storage container building.