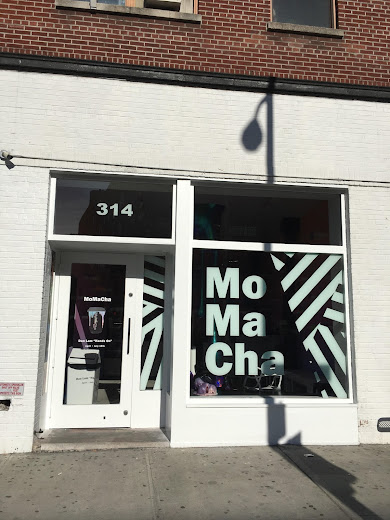 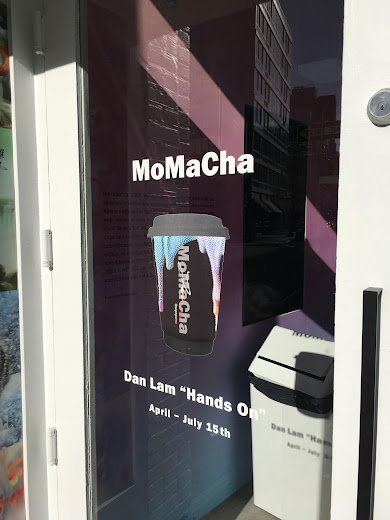 At first I sided with the cafe owners but being the actual logo in this window pictures makes me think the owners were playing to close to the museum's logo for their own good. The fact it is also an art gallery may momentarily suggest a connection to the institution on 52nd street. Yes Helvetica font is used by everyone including the NYC sanitation department on their trucks but the upper lower case play is too much a coincidence. Sorry the big guys win this one.

I walked by there and thought it was some sort of MoMa pop up gallery. The owners can't be so naive to think the graphics don't look exactly like MoMa's look and feel. But maybe that was their plan. Free publicity.

Def agree the owners knew EXACTLY what they were doing with this logo. Likely they were looking for the publicity via lawsuit. If their defense is the name is a take on More Macha then why not MoMACHA or for old school 90s street cred Mo' Macha (Mo' Art)

I think this is all ridiculous !
Using abbreviations with upper and lower case caracters is not MoMA Inventions.

It is typical to New York and The museum of modern art did not invent that. SoHo, NoHo, TriBeCa..... Ny babe !

And then MoMA suying creatives/ artists and not other institutions like MoCa ?

Shame on the wealth club / monster that the MoMa board is all about ! Can’t get a fucking coffee shop to use New York language and do art work. Fuck you MoMa !

I read the Reuters link after I posted my first comment. The reference to MoMA is so strong, I didn't even notice the word macha in the name - and I drink macha every day! Oy...

Glanced at the photo before reading the article and thought "Oh, MoMA!" To suggest that the confusion between this gallery and the uptown institution is unintentional seems . . . disingenuous. Is it witty? Sure. But that's not a defense.

Hands up, Eric Cahan, you're charged with assault with a letter set. Ha!

The NY Post reports that Nev Schulman of Catfish fame is a partner. Perhaps catfishing our community as a MoMA related business was their strategy? https://pagesix.com/2018/04/09/nev-schulmans-new-business-mashes-art-and-matcha/ It's probably not though highly ironic.

This isn't even subtle. I walked by and thought it was MoMA.

The store is clearly trying to benefit from the MoMA brand... or if you want to be less generous about it, rip off the MoMA brand or even deceive potential customers. It does't make sense to criticize MoMA for being the "big bad money litigious type" when the copyright infringement is so clear. The store should simply rebrand itself with a more original (and honest) name and/or logo.

Talk about being disingenuous: Not only did these guys file for a trademark on MoMaCha, thay also filed a trademark application for the name MoMa!

They also filed a Trademark application for “Flow State Energy” which is a pretty lame name but is probably the name they will end up using. Flow State energy sounds like an oil company.

All three applications would apply to coffee and tea beverages. Sorry but I’m not buying the story that they are surprised that the real MoMa is objecting to this potential infringement. Nice PR move though!