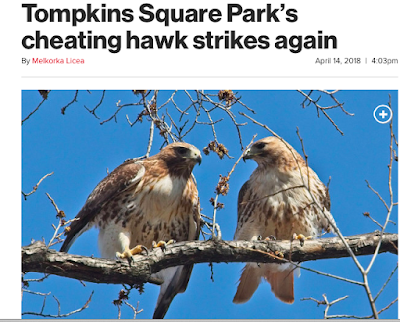 The New York Post checks in (again!) with a feature on Christo... and the various hawks in his life — Dora, Barucha/Nora/Not-Dora and Amelia.

• Tompkins Square Park’s claw-sanova is now servicing not two, but three chicks at the same time.

• The red-tailed stud named Christo made the front page of The Post in March for dipping his, um, beak in the nests of two different female hawks.

• Bird lovers — who have watched Christo and Dora rear 10 chicks and rule the roost at Tompkins for the last five years — are broken up by Christo’s fowl lust.

The piece includes several quotes (and photos) from Goggla.

The story appears on Page 3... 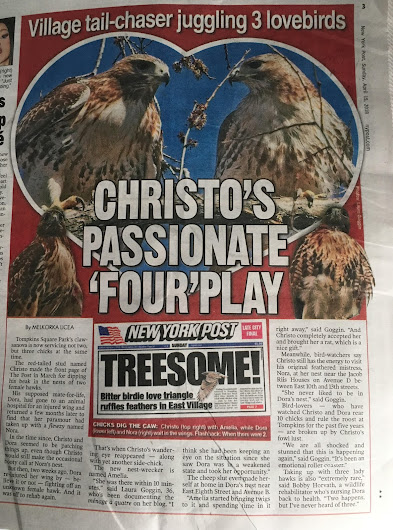 Previously on EV Grieve:
A look at the other OTHER hawk in Christo's life

Post explores the complicated relationship of Dora, Christo and Nora/Not-Dora
Posted by Grieve at 9:19 PM

It is a wingdinger of a story!

For the record, Christo is an extraordinary hawk! He's an awesome father and fostered a baby hawk over the summer without hesitation. He took care of *two* mates and worked on the nest by himself all winter. He's an incredible hunter and makes sure to feed his mate(s) and children before himself. If food gets dropped, he will retrieve it, letting nothing go to waste. He's smart, industrious, fastidious and clean. He'd make the perfect roommate.

I've even seen Christo removing plastic bags from high in the trees in the park. You're welcome!

Christo is a true player.