Jimmy Carbone is on the mend 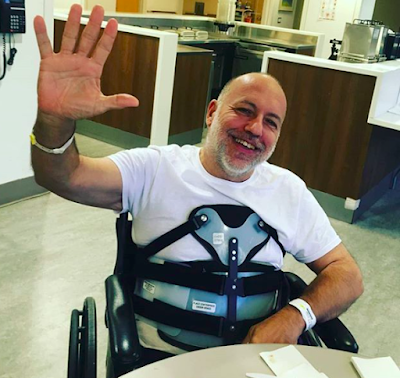 This has been an extremely challenging summer for Jimmy Carbone, the East Village resident and restaurateur.

Carbone, the proprietor of the currently closed Jimmy's No. 43 (and Mugsy's Chow Chow previously), shared the above photo on Instagram this past week of his "new look," featuring a spine brace and wheel chair.

His brother Christopher provide background in this update on Wednesday:

As you know, Jimmy had been in the hospital since June, where they found spinal infection and he had two emergency surgeries.

Since then he had been in and out of ICU and the Acute Rehabilitation wing of the hospital for recovery and rehab. Jimmy was recently shifted to a less intensive facility: NYU Gouverneur Medical Rehab on the Lower East Side.

1. Infection: generally stable, but there is still bacteria lingering in the spine where the rods were installed that can't be cleared out due to the sensitive area in the spine. He will be taking antibiotics for at least another year with the hope there is no relapse.

2. Legs & Spine: Doctors report that Jimmy is very lucky that he was finally diagnosed in June. He was very close to being permanently paralyzed in his legs. Now with ongoing rehab work, he is getting stronger with sitting up with back brace for longer periods of time – and LEGS are BEGINNING to MOVE and get STRONGER!!!

Now Jimmy is STANDING with support for brief periods and Taking SUPPORTED STEPS as well — with Walker/Crutch-support to walk in the future: seeing a chance to cross a finish line, even if it takes a long time… One day, One week at a time.

Financial difficulties forced Carbone to close Jimmy’s No. 43, the restaurant he owned and operated on Seventh Street near Second Avenue for 12 years, in August 2017. (Read more about that here.)

Carbone fell sick last fall and wound up in a hospital. "That was from my 20 years of running a restaurant," Carbone told me on the phone in February. "I let my health go. I had diabetes."

He had lost weight (40 pounds) and was trying to get healthy when doctors at NYU Langone made the spinal diagnosis — stemming from a knee infection last fall. (You can find more information at the Jimmy's Wellness Fund here.)

Hell yeah, I'll be there! I'll take a hospital day pass, practice occupational therapy tasks like: taking a wheelchair in a taxi, using crutches in public, and getting some sun! I've been cooped up in hospitals since June 19, I will not miss this 9th annual event...

Previously on EV Grieve:
Jimmy Carbone and Paloma Rocket collaborating on new venture for the Jimmy's No. 43 space
Posted by Grieve at 4:41 AM

Wishing you the best, Jimmy! May your recovery continue without any complications.

wishing you a speedy recovery Jimmy!

Jimmy,
You were so kind to me and friends making us pasta dinner at Mugsys. I always remember that. Please take good care. Lots of love and support for you.
Rob