A visit to Eat’s Khao Man Gai on 6th Street 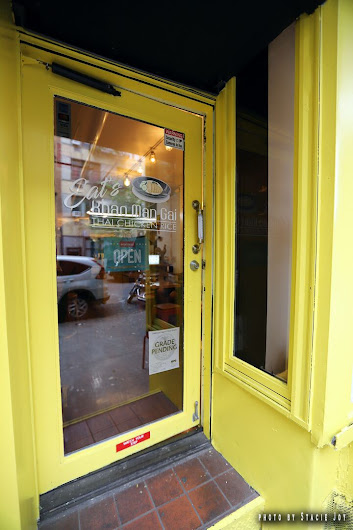 The first thing that strikes me at Eat’s Kaho Man Gai, 518 E. Sixth St., is how spotlessly clean the kitchen is. Immaculate.

It’s almost hard to believe any cooking is done in it! 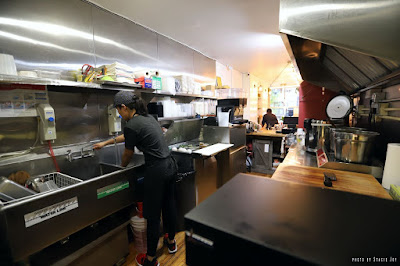 The second thing I notice is the meticulous prep stations, and how space is allocated in this small restaurant. 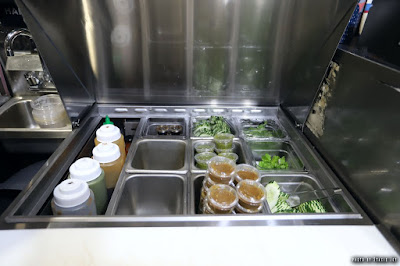 Owner Chai “Bryan” Chunton (also known by his nickname “Eat”) greets me and tells me about the single dish that the space prepares and sells since opening in August. 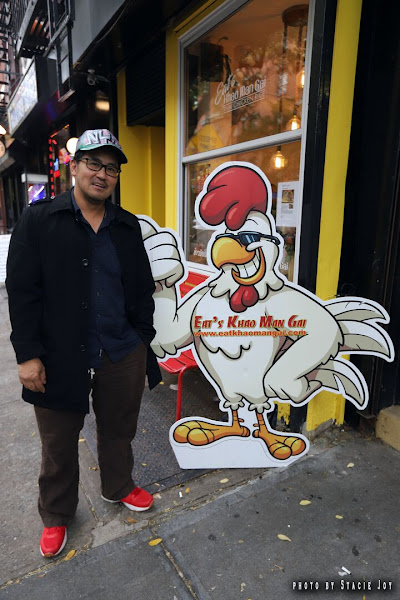 “I think the neighborhood is ready to try real Asian comfort food,” he says. “The East Village needs traditional khao man gai [chicken fat rice]. It’s hard to make. So we make and sell only that dish.”

Eat’s offers two versions of the dish: the original, heritage, free-range bird with liver and gizzards, ginger-scented rice, winter melon soup, plus a few slices of English cucumber, and the vegan version, which has steamed tofu slices, turmeric-Thai saffron rice (made with vegetable stock) and vegan version of the winter melon soup, plus the cukes. There’s also a trio of sauces to choose from: traditional ginger-garlic, sweet brown sugar-soy, and spicy green chili. And both Thai iced tea and a Thai cold brew that steeps for more than 12 hours. 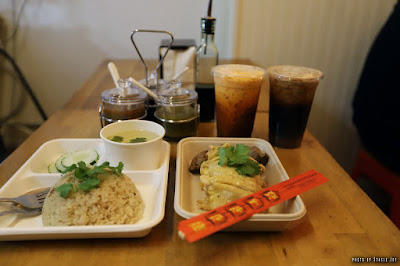 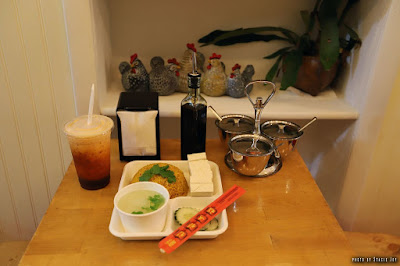 Chunton, who has born in Bangkok and grew up in Queens, decided to open in the East Village because of the interesting food options and adventurous diners in the neighborhood ... and the fact that no one else was bringing this staple of Asian street food to the area. 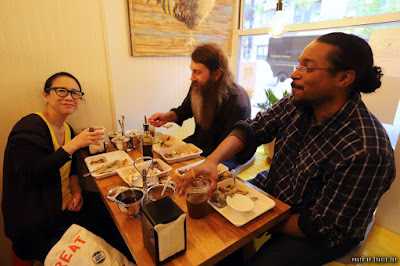 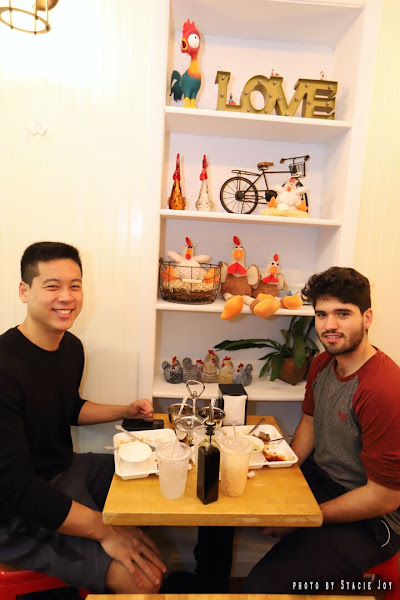 He picked a bright yellow paint so his shop would stand out on the block, and who can miss the giant chicken outside?

Eat’s Khao Man Gai, 518 E. Sixth St. between Avenue A and Avenue B, is open every day from noon until 10 p.m. You can follow them on Instagram. 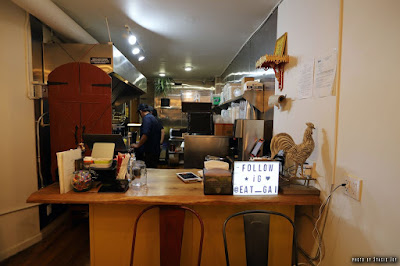 I love this new feature. If it's going to be a regular thing, could we get a tag so that we can see them all together? I want to make sure I try more of these places that I don't normally walk by. Thanks!

Thank you for the photos and article on this new cafe. I hope it succeeds.

How unfortunate that this cafe is using styrofoam containers, plastic cups and plastic straws, none of which can be recycled. I will not eat at any establishment that uses these materials, nor will many of my friends.

Mr. Chunton and other NYC eateries will have to provide non-styrofoam containers, cups and trays as of January 1, 2019.

I urge everyone to ask eateries and grocery stores to switch to non-plastic containers and utensils before the January 1, 2019 deadline. Plastic straws need to be replaced by paper ones.

Of course, you can always take your own earth-friendly containers and utensils like those from Life Without Plastic or the Package Free Shop in Brooklyn.

This is a great feature, almost like a little bit of Anthony Bourdain’s Parts Unknown — whose last episode is on this Sunday, and his last show goes back to where Bourdain got started, right here on the LES and East Village,

I thought thise plates looked like styrofoam as well, but a closer inspection they appear to be those molded paper plates, which are recyclable. If not, I’m sure they will be switching over soon like everyone else.

It looks like a couple of our local musicians gave Bourdain a hard time about his fanboy habit of always seeking out and praising local celebrities, and how he always said everytthing he ever ate on the show was “delicious.” This should be good. Via Newsday:

“Bourdain does lunch with, umm, Lydia Lunch, the no wave post-punk spoken-word artist and punk musician (come on, surely you remember Teenage Jesus and the Jerks or Big Sexy Noise). Over a plate of fancily dressed octopus that looked like it died for some very expensive appetite, Bourdain gets misty-eyed about the bad old days in the East Village and her influence over those.

Lydia quickly sets Tony straight: "I'm not a star, not an icon. That might be your midnight fantasy. I wasn't a catalyst, I was a cattle prod."

Then, there's John Lurie, once of The Lounge Lizards, ultimately a Jim Jarmusch star, also creator of the album, "The Legendary Marvin Pontiac." While in his apartment, Lurie slyly sizes up his famous guest, then pops a few eggs into a pot of boiling water. "I've seen your show," he deadpans. "You always say everything is 'delicious.' I'm just curious to see if when you eat the hard boiled egg, you say 'it's delicious.' "

Looks like paper containers to me. And I agree with the proprietor--we do need more chicken fat rice around here. Even if it's not a commonly known dish in the US, it ought to be. Most people already like chicken, and rice.

Lydia Lunch and the James Chance...two Prizes from the Bad Old days.

Those are clearly molded non styrofoam recyclable plates. Why is it always the ones who don’t know what they’re talking about who be whining the loudest?

I've tried their chicken fat rice a few times and it's tasty, as are the condiments, but it doesn't hit the sweet spot for me price-wise: one portion, which is a light meal, is $10 plus tax & tip, or about $12. I also think they need to offer more items, because how often are most people going to eat Khao Man Gai?

Recipe for hard-boiled eggs: cover eggs with cold water, bring to rapid boil, turn off heat, cover and let sit for about 12-14 minutes (depending on size and temperature of eggs and how hard you want them). Don't peek while they are sitting!

Whenever I hear the name John Lurie I think of his (hard boiled) character in the East Village classic Stranger Than Paradise. I doubt any trees were killed in the filming by Jim Jarmusch...

I have been there, the food is very good, natural free range chickens. They use sugar cane tray and containers, wooden chopstick, utensils is washable.

I saw they have new items on menu. Pra Ram (poached chickens with peanut curry sauce and morning glory & Khao Moo Krob (crispy pork over rice with boiled eggs) maybe they will add more and more in the future :)