Gay couple who live in the East Village say they were subject to hate-filled tirade by Uber driver; one passenger dragged along Fourth Street by car (NBC 4 ... New York Post ... Daily Mail) 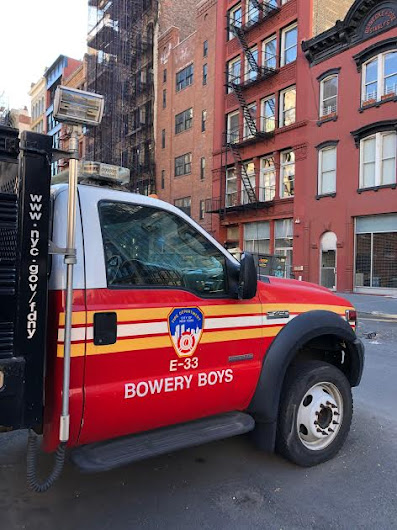 [The Bowery Boys on Great Jones]

Spike Lee retrospective coming to the Metrograph on Ludlow (Gothamist)

Architects offer their opinions on the NYC of Amazon, "and it’s terrifying" (Fast Company)

Robert Plotnik, the owner of Bleecker Bob’s, the Village record shop that was forced to close in 2013 after 46 tears in business, has died. He was 75.

The owner of Academy Records on 12th Street posted this remembrance...

RIP to Bleecker Bob, a true legend on the NYC record store scene and probably the most singular character among that very idiosyncratic bunch. I first got to know Bob and his wise cracking sarcasm as a teenager in the late 70s as I soiled my fingers flipping through his grimy reused record sleeves. I also quickly learned that he loved an equal dose of sarcasm in return and our interactions were some of my first tastes of what it meant to be a real New Yorker. When I first opened my store in 2001 it was a real badge of honor when he came to check it out and told me it didn't suck too bad. Catch ya on the B side Postscript: Around 1990 I went into Bob's with copies of my band's demo tape. Bob: "Who's gonna buy this shit?" Me: (pointing to $1000 Stones record on the wall) "I dunno, who's gonna buy that shit?" Bob: Ok I'll take five

Bleecker Bob's have a bid on space in the East Village

I hope the NYPD releases the camera footage.