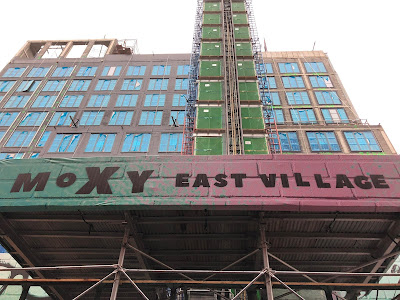 As previously noted, the incoming Moxy East Village will have four eating-drinking establishments — "for guests and locals" — here on 11th Street between Third Avenue and Fourth Avenue.

Here's what's planned for the 13-story hotel in partnership with Marriott, according to a recent news release: a cellar-level restaurant and lounge, a lobby bar and lounge area, "an elevated twist on a traditional Grab & Go," and "an outdoor rooftop amenity."

Reps for the hotel are expected to appear before CB3's SLA committee on Monday evening to seek liquor licenses for these various concepts. (As of now, the questionnaire with more detailed information on the bars and restaurants has yet to be posted on the CB3 website. Update: The questionnaire is here. I haven't had time to go through it all just yet... The TAO Group, which operates about 500000 venues, including the Moxy Times Square, is the bar-restaurant vendor for the EV location as well.)

The Moxy is slated to open in late 2019. The Lightstone Group bought the five-building parcel of apartment buildings that stood here and had the properties demolished in the fall of 2016.

The committee meeting starts Monday at 6:30 p.m. Location: The Perseverance House Community Room, 535 E. Fifth St. between Avenue A and Avenue B.

CB3 should require them to put a sound-proof bubble over their "roof top amenity" so that the neighborhood will be able to get some sleep.

I find it perverse (to say the least) that Marriott, a Mormon company, is building hotels to CATER to drinkers of alcohol (and YOUNG drinkers at that).

All efforts should focus on eliminating the outdoor roof bar. These "amenities" are what cause outrage in a neighborhood. There is no rationale hope that you can prevent a hotel from getting a liquor license. But I think we can deluge our elected representatives to kill the outdoor roof horror.

Totally agree: NO ROOF TOP BAR. It's one thing having 4 bars inside a hotel. But when one of them is an open roof space... then the community will be negatively affected. VOTE NO ON THE ROOF!

Someone had fun raiding the tired ideas box. Almost everything in NYC, including Wallgreens, is now "Grab & Go."

"Rooftop Drink and Rave until closing time" is more like it.

I have a feeling this Moxy is going to bomb. The one they built by Macy's doesn't look like it gets a lot of customers.

Guarantee if this doesn't meet their lofty expectations, it will become a homeless shelter.

JQ LLC: If it doesn't make it as a hotel, NYU will buy it for a dorm. If that transaction hasn't already been made. Save us from these neighbors!

In other news, Moxy Hotel owner Marriott announced today that it’s Starwood reservation system had been hacked, exposing the data of 500 million guests, since 2014. For about 327 million guests, the information included "some combination" of name, mailing address, phone number, email address, passport number, account information, date of birth, gender, and arrival and departure information. And of course, their encrypted payment card information. All hotel guests should make sure to stop by the rooftop or lobby bar before they check out, they’re going to need it.

Speaking of personal data, I recently received an email threatening to take over my computer and expose my dark secrets, if I didn't transfer a bitcoin to the blackmailer. I'm sure the threats would not have stopped with one bitcoin.

The emailer had one of my passwords, but fortunately one I don't use any more. Also, I don't have a "darkish secret life."

I ignored the email and so far no one has taken over my computer...

That's a common scam. The only thing the scammers have is a password. You'll note that there aren't any details about the sites you've supposedly visited. I've gotten some of those notices threatening to release my computer's camera pictures, but there's never been a camera on my computer.

You can safely ignore those.

However, I do send my condolences that you don't have a darkish secret life.

I got one of those emails too, telling me the sender had video recordings of me "doing naughty things", and if I didn't send him a thousand bucks in bitcoins he would release the footage to my family and friends. I wrote back and congratulated him on being able to get those videos, given that I have always placed a piece of black electrical tape over the camera on my laptop and I've never filmed a naughty inch of footage in my life. I then told him where he could place the thousand dollars in bitcoin he was demanding. Altho I do wish I knew how he'd gotten hold of one of my passwords!