Ray gets to see Ray's Candy Store on 'Parts Unknown' 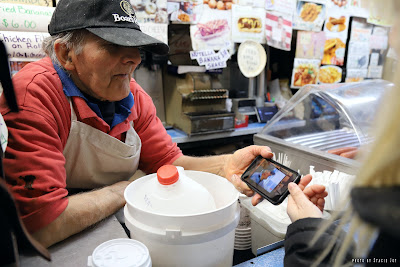 CNN aired the series finale of Anthony Bourdain's "Parts Unknown" last night, as you might know. The episode, which arrived five months after the TV host and writer's death, was set in the East Village and Lower East Side. "This is a show about a very special place, a special time, and some very special people," Bourdain announced in the intro, the only voice-over during the 75-minute show.

Ray's Candy Store on Avenue A was among the stops (this listicle has all the places he visited) that Bourdain made with a variety of artists, musicians and filmmakers.

Ray was working and didn't get to watch any of the episode. However, afterwards, he was able to see his appearance — in which he serves Bourdain and Harley Flanagan egg creams — courtesy of Eden's smartphone. (EVG contributor Stacie Joy was among the people who stopped by Ray's last night.)

Meanwhile, over at Eater, Greg Morabito complied his best moments-quotes from the episode, including:

Bourdain asking Jim Jarmusch and Amos Poe about the neighborhood: “What do you think now when you walk around the neighborhood? You paid some dues to walk down back in the day, now it’s projectile vomiting frat boys with their baseball caps on backwards. Does this give you a sinking feeling or make you angry?”

Jarmusch, responding: “The thing that I always tell myself is: Look at the history of New York City, and it’s always about hustling and change. And if you want it to stay the same, man, you’ve got the wrong historical spot, because there used to be a Native American trading post on the tip of Manhattan. It’s now Wall Street.”

FUUUUUK YES!!! congratulations ray! can't wait to see it myself! best egg cream in the world!

Ray is an incredible part of the village - so glad to see him honored in this way.


Word on the street is that Mistah Ray is going to star in new flick,
"Hot Tub Egg Creme". Release date tba.

The difference, Mr. Jarmusch, is that we see now was engineered by the City and elite real estate insiders. It was not a organic change. It was forced on to us.

Just watched this and I have to ask how Bourdain did this LES trip down memory lane and completely left out any interviews with Puerto Ricans whose music, art, poerty and daily lives defined and influenced the neighborhood more than any other culture during this period of time.It was an interesting look at punk rock music and art culture but almost everyone he interviewed was white and moved into the neighborhood from other places.I did enjoy Harley Flanagan's interview especially when he talked about the hit man club because one of them put a large gun to my head once when they were robbing the Pope Of Pot's place at 11th and B.

That was the perspective he chose to tell -- probably because it was closest to him.

He was a pretty inclusionary dude who may have had plans to tell a bigger NYC story, but unfortunately we'll never know. This city provides many perspectives and stories, it's impossible to include them all in one tv episode.

I'd rather have a good story about one perspective than scrambling to satisfy everyone and tell many perspectives shallowly. Quality over quantity, my friend.

If you watch a few of Anthony Bourdain’s shows, you will hear him talking about how none of the kitchens in New York restaurants would be able to operate without the mostly Latino immigrants who do most of the hard labor, and how great these workers were in the restaurants where he worked.

In the West Texas episode, he talks to white ranchers who tell him a wall on the US Mexican border would be a disaster for everyone, and shows how well the people who live on both sides of the border get along. He ends the show sitting on a river which runs between our borders, at a small campfire party where everyone celebrates the natural beauty and sense of community that would be lost if these two countries were ever separated by a wall. He notes that both sides of the border look exactly the same.

You come away wondering how would anyone with a brain could want to put a wall down the middle of a river, much less on the US-Mexican border.

Note to anonymous....It would have been a relatively easy thing for Bourdain to talk to someone at the Nyuorican poets cafe or talk to anyone associated with Charas. I also note that none of the people he interviewed said anything about the Puerto Rican poets, artists and musicians either. Anyway at least Clayton did show his heroin bag collection which influenced all the punk rockers, Bourdain himself and the Puerto Rican community because the allowance of heroin by the government to be sold openly helped bring the punk rockers to the neighborhood and destroyed a lot of the housing stock and gave the police payoffs and a way to destroy Puerto Rican political and social change organizing and put many of those who had no job opportunities in the dope business and paved the way for big bucks real estate to eventually take over and get richer.