Dallas BBQ is here to stay 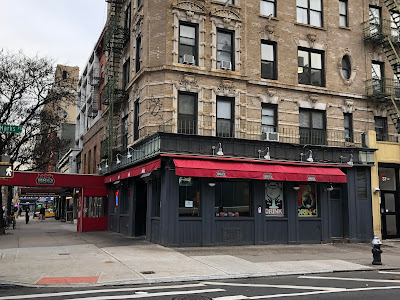 You may have noticed the recent arrival of those mysterious flyers in the front windows of the always-crowded Dallas BBQ on Second Avenue and St. Mark's Place noting "Here we stay..." 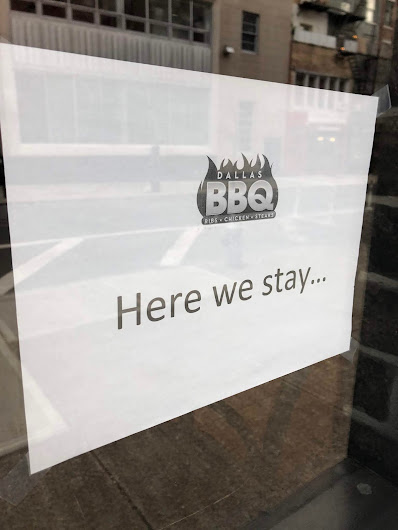 Perhaps it's a variation of dining in...? EVG correspondent Steven spoke with a manager, who said that Dallas BBQ was considering moving to a new location. Apparently word leaked to some regulars. Ownership decided to stay put, and the signs are to let their customers know that they are not going anywhere.

The original Dallas BBQ opened on the Upper West Side in 1978. The EV location debuted at some point in the 1980s. (If anyone can supply the exact date/year...)

Previously on EV Grieve:
Mom jailed for leaving toddler outside Dallas BBQ speaks out 20 years later
Posted by Grieve at 4:30 AM

Anyone remember Wetson's hamburger stands? They were basically NYC copies of this west coast place called "McDonald's", that eventually went out in the late 70's, once that west coast place started franchising in New York.

Glad Dallas BBQ'S is staying. A popular place for my late wife (whom I dearly miss) and I to hang out in the 80's, and yes argue cause of me drinking too many of those giant magararita drinks! A nice EV joint!

Shocked to learn that Dallas BBQ has reuglars

Every morning I pass this restaurant on my way to work. I have to breathe through my mouth so avoid smelling the vile exhaust coming from their kitchen. Other restaurants don't reek like that. Can that be avoided or is that just how nasty the meat/bbq is?