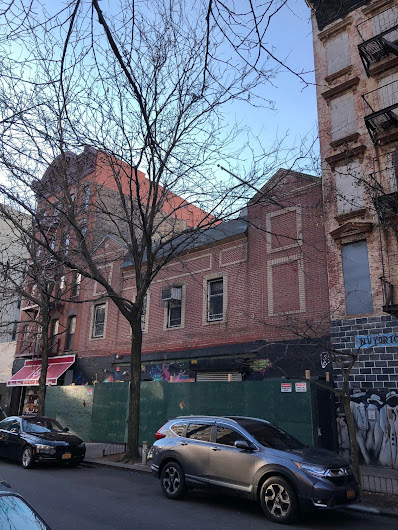 The plywood recently arrived outside 238 E. Third St. between Avenue B and Avenue C... 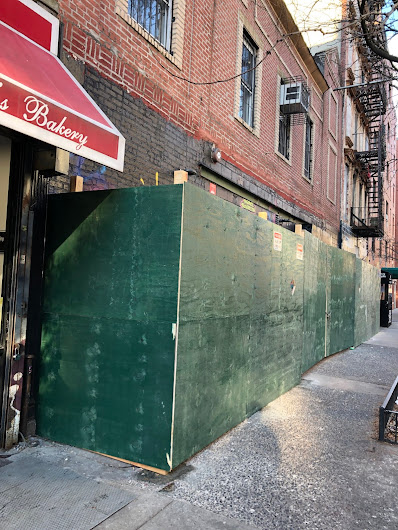 ...where there is a pending new building permit for a 7-floor residential complex.

As New York Yimby noted back in March:

The new structure will be designed by Vikatos Architect, and will comprise a total of 20,928 square feet of living area with a total built-up area of 27,657 square feet.

The building will rise seven floors above ground to 75 feet, with additional cellar living area and a basement. 20 rental units are planned, in total, putting the average unit at about 1,046 square feet.

But first, the existing structure needs to be demolished. (Those permits were filed at the DOB in July.) The arrival of the plywood is the first sign of the impending demolition here.

The current building, which the Blue Man Group owned at one point for use as a practice facility, also served as a movie theater. Public records from July 2017 list two of the founders of the Blue Man Group — Chris Wink and Philip Stanton — as the previous owners, who received $18.6 million for this and another LES property.

Vinbaytel Property Development is the new owner of No. 238. Vinbaytel has developed several East Village condos in recent years, including at 227 E. Seventh St., 67 Avenue C and 26 Avenue B.

Sad, that building was cute.

It's 242 East Third—the building next door—that I keep my eye on; that storefront was Slugs', the notorious jazz club where Lee Morgan's girlfriend shot him dead in 1972.