Hilly Kristal debuted the short-lived CBGB's Theater at 66 Second Ave. at this time in late 1977 ...

Here's one description of the CBGB Theater via: "The place was disgusting. It made the CBGB club look like the Rainbow Room. We were talking about eighty years' worth of dirt. I mean there was popcorn left over from the last performance of the Yiddish theater in 1925...They did manage to clean up the entryway, and made it look like a subway station."

Read more about the Anderson Theatre, 66 Second Ave. between Third Street and Fourth Street, at Cinema Treasures and It's All the Streets You Crossed Not So Long Ago. 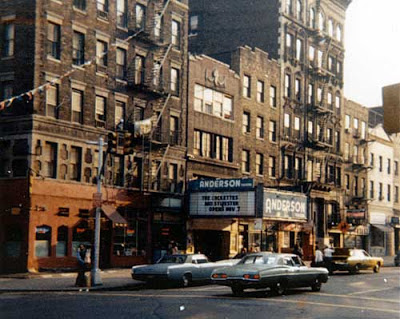 Previously on EV Grieve:
When you could see the Grateful Dead on Second Avenue for $2
Posted by Grieve at 8:29 AM

When I moved in across the street in 1982 that large sign was a balcony for the squatters. It was full of wooden sculptures and rabbits, yes, live bunny rabbits. Miss the marvels of the old EV when every block was an adventure.