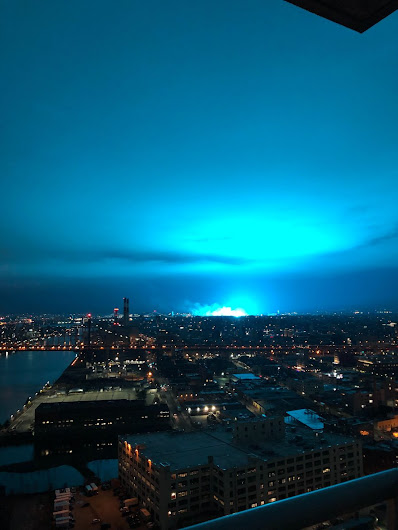 The Con Ed transformer explosion tonight in Astoria brought back some memories ... to when the transformer blew at the Con Ed plant on 14th Street and Avenue C the night of Superstorm Sandy in October 2012.

EVG regular William Klayer took this shot at nearly the moment he heard the explosion about 8:13 that night in 2012, bathing the sky in an eerie gray-blue light similar to what people saw tonight ... 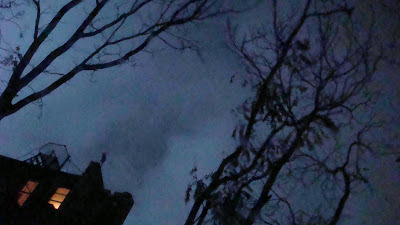 And the second explosion the night of Sandy, which KO'd the power to lower Manhattan (as seen from Brooklyn)...

This, unfortunately, is one of the ways Con Ed is quite reliable.

I realize that Sandy devastated so many but here in the EV, it was kind of fun actually.

Saw the national news about the blue con ed explosion today... and my first thought was of EVGRIEVE and the photos from 2012.

1:39pm: Are you very young? Because it wasn't so much "fun" for my neighbor, who was in her late 80's at the time (she had serious health problems and, thank God, a dedicated home-care aide), when we went for nearly 5 days & nights without light or heat south of 14th St.

You can't just pick up a fragile elderly person & all of their necessary medical equipment and check into a hotel (even if you have the money for a hotel) - and the hospitals were having their own crises at that point with flooding and power outages, so you also couldn't just summon an ambulance and get that elderly person dropped off at a nice cozy hospital, either.