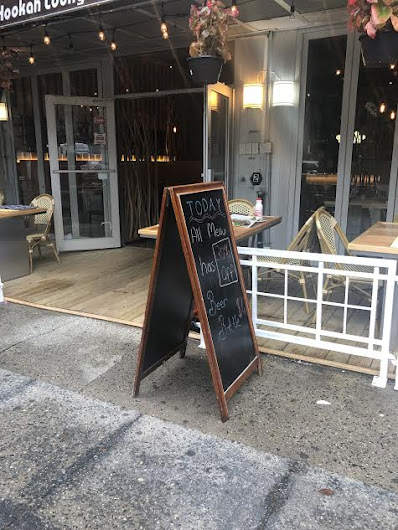 In less than a week since it debuted, Medina's Turkish Kitchen – its front door and windows open to the street, with sample dishes prominently displayed on a sidewalk table – has already added a mood of welcoming hospitality to this block of Second Avenue between 10th Street and 11th Street. It isn't much of a stretch to say that just walking past is almost like being transported to a Southern European seaside city and finding yourself in front of an unpretentious neighborhood brasserie.

A friend from Sweden and I were passing by on opening night, on our way to one of the many Asian restaurants now dotting the neighborhood. But the delicate scent of what turned out to be roasted red peppers, along with the smiles of the welcoming staff, were irresistible. So we sat down at one of the sidewalk tables and ordered from the eight-page menu. Yes, lots of choices there.

Midway through dinner, Medina's overseer-chef, Aydin Zeikrovski, stopped at our table to say hello. Always the nosy reporter, I asked him about his previous restaurant experience. That was in Denmark, he said, where he'd lived for 11 years. I too lived there for many years, and suddenly we were speaking Danish together. And then he turned to my friend Monika and started speaking Swedish with her. Turns out he'd lived briefly in Sweden too. (He's quick with languages, evidently.) 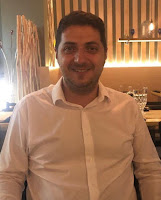 Having lead the wily, event-filled, quick-on-his-feet life of a contemporary émigré, Aydin is largely responsible for Medina's mood and food. He's originally from Ohrid, a lakeside city of historic monuments and cobblestone streets in North Macedonia, where he was raised by his Turkish mother, Albanian engineer father and Turkish grandmother.

It was that grandmother, a chef, who taught him to cook. One of his distant cousins is also a chef – René Redzepi, founder of the celebrated, world-famous Copenhagen restaurant, Noma. Gastronomy has got to be in this family's DNA.

In 2003, at age 14, Aydin moved to Denmark, home to many transplants from the former Yugoslavia. There, he continued his education, eventually graduating with a marketing degree. But he never abandoned cooking.

While at university, he ran and was the chef at a fast-food eatery in Copenhagen's gritty, lively Nørrebro neighborhood (similar in spirit to New York's East Village and Lower East Side). The house specialties were home-cooked-style chicken and salads, prepared with healthy ingredients. So successful was this little restaurant that it expanded with several branches around town.

In 2011, Aydin made another move, to New York. Here he's become a U.S. citizen, husband, father of two, and consultant to the foreign and domestic travel industry. And now – partnering with his father-in-law – he's running Medina's, which happens to occupy the 700-square-foot space that most recently housed the Dinah Hookah Lounge, before that was a Dunkin' Donuts, even earlier on was a pizza-by-the-slice spot — and going way back in time, had been a paint store.

"Meat and salads are the most important elements in Turkish meals," Aydin says. His ingredients are high-quality, and all the condiments (even the salt) are organic and imported from Turkey. The appetizers include those Mediterranean standards, hummus, stuffed grape leaves, baba ghanouj, and tabouleh. But not to be missed are the amazing Sigara Boregi—fried filo dough stuffed with feta cheese — and the home-made seasoned fries accompanied by a secret sauce.

Aydin is proudest of the gyros platters. One of them is made from sliced lamb and rib eye sourced from a 25-acre organic farm in Pennsylvania and seasoned with herbs and spices. And then there are the kebabs. I ordered the beautifully flavored chicken shish kebab, marinated in dried red and white peppers, curry, and olive oil sauce. Other choices include rib eye steak, fried calamari, mixed grill, bronzino and salmon.

Dessert? There's baklava, of course, as well as rice pudding, Turkish custard, and a dish that may be new to many – bubbling-hot, oven-baked Kunefe: shredded filo dough filled with mozzarella-like Turkish string cheese and doused with honey mixed with homemade cane sugar syrup. (I can readily imagine consuming Kunefe as a one-course meal accounting for a full day's worth of calories.)

Beverages include Turkish and American coffee, Turkish tea, ayran (the frothy yogurt drink), and growing selections of beers and wines. The Sapporo-like Efes comes out of Turkey's oldest brewery. Macedonian wines may soon appear on the menu.

Don't be surprised if the menu expands even further to — who knows? — dishes from Denmark. Aydin and his staff are open to and eager for suggestions from diners and passersby. (If you happen to stop by to see Aydin in the days ahead, he's now out of town until early September.) 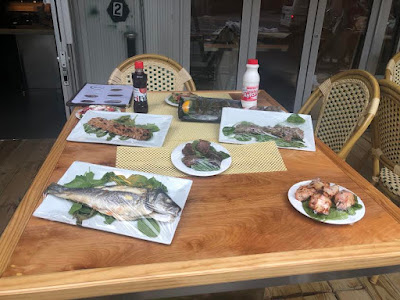 Linda Dyett is an East Village-based freelance writer and editor who’s been published in The New York Times, The Washington Post, Monocle, New York magazine and — back when glossy magazines were still magazines — Allure, Glamour, etc.
Posted by Grieve at 8:00 AM

The food maybe be great but the tables look to be so uncomfortable. There's a brushed steel box that's too big for the top so the diners have to sit side-saddle to eat. Not very comfortable for a night out.