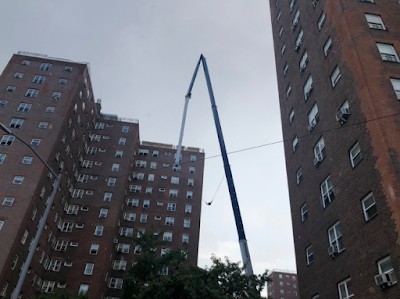 Officials at the Department of Buildings yesterday stopped all work citywide by United Crane and Rigging, the company reportedly responsible for the July 30 boom collapse at the Jacob Riis Houses, 749 FDR Drive and Sixth Street.

According to their report, the operator hoisted a load of steel beams that weighed 700 pounds more than the crane's permitted lifting capacity. The collapse forced the temporary evacuation of more than 100 families as well as the closure of the FDR.

United was also involved in a fatal accident this past April 13 at 570 Broome St., in which the counterweight of a crane fell to the ground and killed a worker.

Here's more from a news release via the DOB:

The agency’s order will remain in effect until the firm replaces the personnel who supervised the crane work at this and 21 other locations, and puts in place an independent monitor who will make monthly safety-compliance reports to DOB regarding United’s work.

DOB’s investigation of the FDR Drive incident revealed that the crane’s operator lifted a load of steel beams that weighed more than 4,400 pounds, exceeding the crane’s permitted lifting capacity of 3,700 pounds. The total load weight caused the crane’s boom to bend and partially collapse. The collapse of the boom caused the operator to lose control of the load, which struck the roof and side of the building before falling to the ground. The load of steel was intended to be placed on top of the building to support future mechanical equipment.

Accordingly, DOB issued five violations today to United that carry penalties of $110,000. The violations include failure to designate a qualified and competent Lift Director; failure to make proper notifications to DOB regarding the work that was being performed; inadequate safety measures on site; failure to safeguard the construction site to protect workers and the public; and failure to have proper construction documents on site.

Below is my statement on the closing of the DOB investigation on the crane collapse at Jacob Riis Houses. pic.twitter.com/QGcf3bbdoh

The city has been upgrading buildings in the Riis complex in recent months as part of the Sandy Recovery Program Restoration.

As she wrote, the crane collapse was "the latest in a string of failures for an agency with an entrenched culture of mismanagement, documentation of wasted resource and a seeming disregard for hundreds of thousands of New Yorkers who live in public housing." 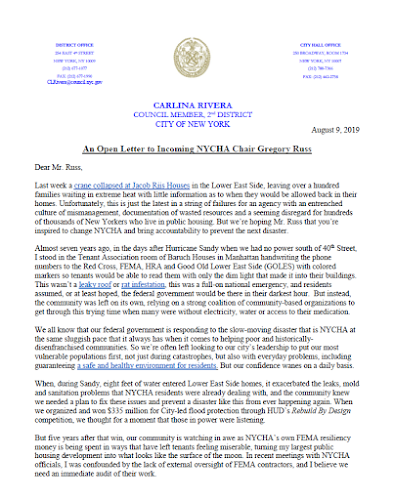 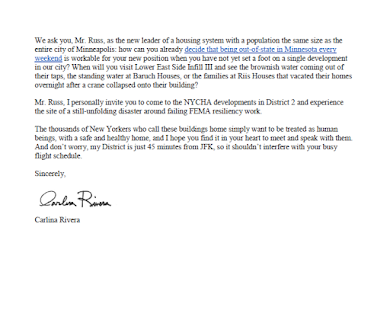 You can read more about the Rivera letter at the Post and Curbed.
Posted by Grieve at 4:30 AM

What is the backdoor deal DiBlasio is playing here? He's turned out to be a boob. What NYCHA needs is someone interested enough to be around 24/7 and really turn things around. Can't do that on the airplane shuttle. And how unsustainable is commuting to MN every week? Poseur socialist bullshit.

NYCHA is not fixable the whole thing needs to be taken over by HUD neither the city or state have shown themselves capable of managing 325 Projects the politics local involved will prevent the hard and unpleasant but necessary decisions from being made. A monitor is not enough to fix this to any respectable level.

@9:40am: HUD? You think Ben (the brain surgeon) Carson is qualified to take this on and straighten this mess out? I have a couple of used bridges to sell you.

You knock the same people who you are begging for money. That always works. HUD doesn't want to deal with this mess. They will let NYC deal with it and pay for it.