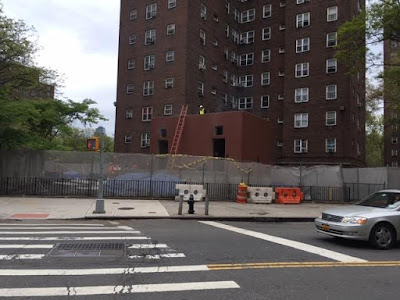 From the EVG inbox, a reader shares these photos from outside the Jacob Riis Houses along Avenue D... in case you saw this and wondered what was happening.

When asked, the workers said that this pavilion was for a backup power generator... 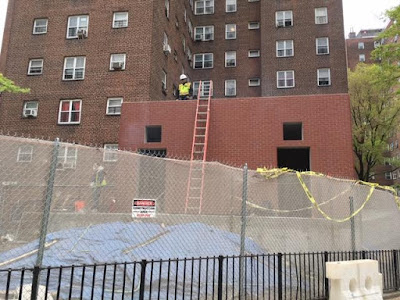 This is only but one of the upgrades planned for the Riis Houses in the years ahead. Back in December, WDF Inc. was granted a contract in excess of $71 million by the New York City Housing Authority for the Sandy Recovery Program Restoration.

According to a release announcing the contract:

Exterior upgrades include new roadways, sidewalks, green spaces and pedestrian lighting. Architectural improvements include the rehabilitation of building entrances, lobbies and storm damaged portions of all twelve buildings. Work on the project is expected to commence in the summer of 2019 with substantial completion anticipated by mid-2022.

In total, 210 NYCHA buildings are expected to be powered by permanent, full-load generators in case of outages.
Posted by Grieve at 4:10 AM