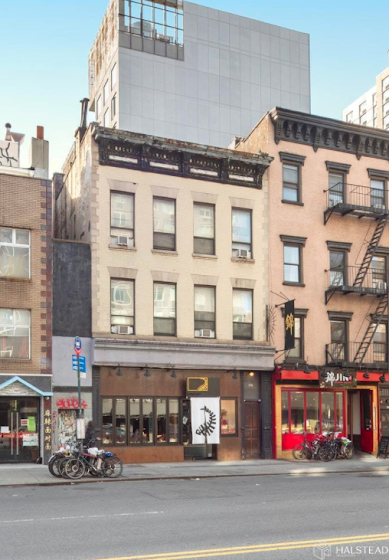 The three-story building at 54-56 Third Ave. between 10th Street and 11th Street has arrived on the sales market.

Halstead has the listing:

The building has a 31.5-foot wide front and great existing as well as future solid income. There is over 13,500 sq ft of unused FAR, which gives tremendous opportunity for new development.

This is the latest building along this corridor to get listed. Last August, Investor Ari Zagdanski’s Kinsmen Property Group bought 62 and 64 Third Ave. at 11th Street for a reported $23 million.

Zagdanski told the Commercial Observer that he didn't have any immediate plans to redevelop the residential buildings, but said he was drawn to the neighborhood because of its new developments, including the nearby Moxy East Village around the corner on 11th Street.

The 13-story, 285-room hotel from the Marriott brand is expected to open this October.
Posted by Grieve at 4:09 AM

Here we go again; get ready for another over-sized out-of-context building that caters to the moneyed. I hate what is happening to this neighborhood, and I hate the NYC doesn't give a shit about what's happening (other than to collect pay-offs $$).

You KNOW whatever will happen here will be glassy, ugly, and full of entitled bro's.

Whoa, there is a busy Japanese restaurant there? Honestly had no idea. Maybe if I stopped holding my nose and walking as fast as possible through this part of the neighborhood, I might notice more shit.

Ok I just looked up Kotobuki, and their other locations are: Haupaugge, Babylon and Roslyn. Gag! No offense to Long Islanders, of course.