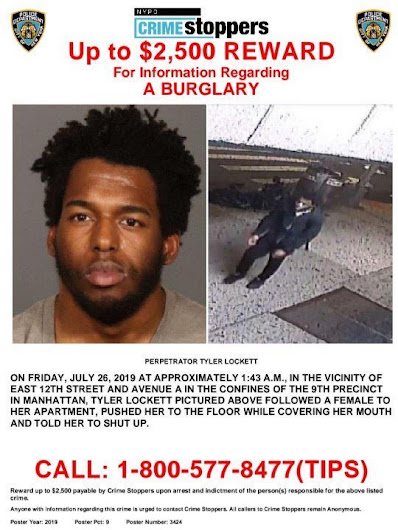 The NYPD is offering a reward on Tyler Lockett, the suspect they say followed a woman into an East Village apartment building and then pushed his way into her residence early last Friday. (Reported here last Saturday.)

Here's the narrative via the NYPD...

On Friday, July 26 at 1:45 a.m., the individual followed a 21-year-old female victim into her apartment building within the vicinity of Avenue A and East 12 Street and forcefully pushed his way into her apartment. The male individual then grabbed the victim, told her to, "shut up," threw her to the ground and covered her mouth to prevent her from screaming.

The victim's 22-year-old female roommate, who was home at the time, awoke and encountered the individual, who then fled the apartment and was last observed fleeing, on foot, within the vicinity of 11th Street and 1st Avenue. No property was taken and the victim was not seriously injured as a result of the incident.

The individual is identified as Tyler Lockett, 22-year-old male, 5'5" tall, weighing 130 lbs., with brown eyes and black hair; he was last seen wearing a black sweatshirt and grey sweatpants. Tyler Lockett is known to frequent areas within the confines of the 90 Precinct.

In January, Lockett was arrested for a similar robbery-home invasion in the 90th Precinct in Williamsburg. In that incident, police say he forced his way into a 23-year-old woman's apartment, locked the door, grabbed her purse and fought with the victim.

Anyone with information that could help in the investigation is asked to call Crime Stoppers at 1-800-577-TIPS (8477). You may also submit tips online. There's a $2,500 reward for information that leads to Lockett's arrest.

The NYPD made an arrest...

Thanks to the work of @NYPDDetectives in @NYPDSVU and sharp-eyed officers of the @NYPD90Pct, TYLER LOCKETT was apprehended! Thanks too to the community for its help sharing this! #NYPDConnecting #NYPDProtecting pic.twitter.com/M6xByGGT7y