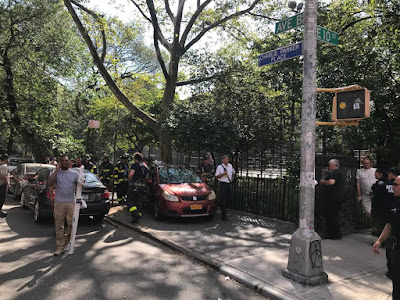 There are a lot more questions than answers at the moment late this afternoon after a car struck a 72-year-old woman on the sidewalk on Avenue B at 10th Street.

It's not immediately clear how the car ended up on the sidewalk, striking the woman in the process.

Some more photos from Avenue B and 10th St where a person on the sidewalk was hit by a car. No idea why it was on the sidewalk. pic.twitter.com/PRURgRun5S

Witnesses report that the woman was pinned under the car. Emergency responders took her away with reported head injuries. 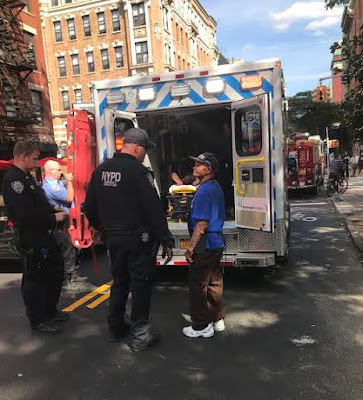 ABC 7 reports that the driver was making a U-turn.

Officials later said the driver was actually attempting to make a U-turn, and when he put the car in reverse, it jumped the curb and struck the pedestrian.

Police say the woman was taken to Bellevue hospital in serious condition, but was expected to survive.


No word about charges against the driver.

Witnesses said that the woman was one of the longtime shaved ice vendors on Avenue B... 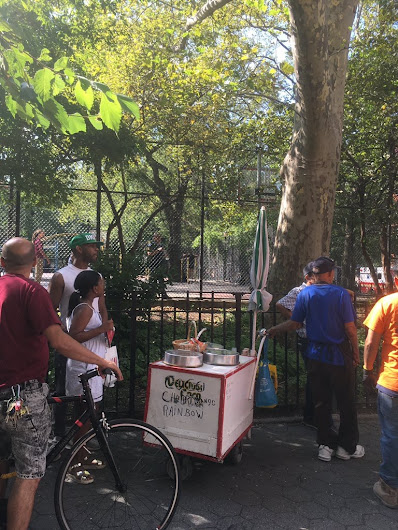 Yes, as several readers noted, this corridor is one that local elected officials are urging the city to make safer for cyclists and pedestrians.

An aerial view early this evening via a Citizen user... 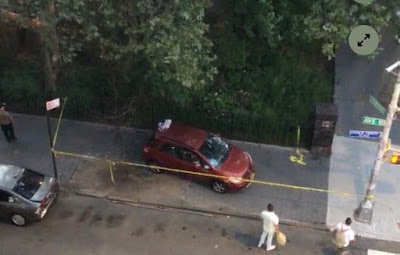 Email ThisBlogThis!Share to TwitterShare to FacebookShare to Pinterest
Labels: Avenue B, collisions

Nooooo, not the shaved ice vendor :( Hopefully she's ok, I miss her on Ave B already

Holy shit. Poor thing. That is an awful thing to face. I hope she will heal soon.

Not a uturn if in reverse

Oh noooooo. This is terrible. I hope she’ll be ok. She’s such a nice woman and neighbor!!

I hope they charge the driver with more than making an illegal uturn. Drivers should be criminally liable for injuries they cause when they ignore traffic laws.

I hope she sues the sh it out of this as shole.

I've seen so many people doing U-ies in this neighborhood, and the only reason I never saw anyone hurt was that there was no one in the way—of drivers, I mean, because this city belongs to drivers.

A brain injury, unfortunately, takes a long time to recover from. I wish her all the best.

This is a terrible accident for sure. Looking at the arial photo I notice how the car is situated on the side walk.
I hope the woman is going to be ok. A U turn is legal as long as it is a broken u turn.
Ave B is a small ave to be making a u turn on.

Stop thinking that the driver will be charged and every body will be safer.
The driver will not be charged as any other driver who killed or maimed somebody else unless he was drunk or on drugs. The NYPD does not charge drivers drivers for moving violations unless they observe them. We need safety improvements on Av B, CB3 asked the city to provide solutions and we need to demand these solutions will be implemented.
Our neighborhood streets are not safe for us: not on the sidewalk when we’re walking, not on the road when we’re riding (and as the crash on Coney Island Avenue two days ago shows not even when we are driving vehicles lawfully. Reckless driving is allowed in the city by the NYPD who does not target the most dangerous street users and the streets are not safe by design since the city DOT drag their feet by not putting quick safety improvements on dangerous streets.

This is scaary to hear my mother lives right across the street and she always crossing towards that direction to go to the park ,so sorry to hear what happen hope she has a quick recovery

not starting one, but there should be a legit gofundme for her. serious injuries mean serious hospital bill that shaved ice wont pay for.

I hope she recovers. I have also seen several cars making u turns on Ave. A, which is dangerous and stupid. These drivers should obey the law and drive two or three more blocks to get to where they are headed.

If I were the driver, and somehow this woman didn't make it, I would truly be suffering for the pain I caused the victim's family. For her sake, I hope she makes it. For the sake of the driver, I hope he faces the consequences of his actions.

If true I can't believe U turns are legal in NYC? I'm very saddened to hear about this women being run down by this idiot.

If your car ends up on a sidewalk, you should be charged with a felony. That's just my wacky opinion. Careful attentive drivers don't put their cars on the sidewalk, ever. Car on the sidewalk means you were not exercising care, and you were going too fast, and more than likely, you were not being considerate of other people's uh, right to exist.

In the reality of road mayhem in NYC in 2019, this driver might get a minor moving violation, if anything at all. Probably also got a consoling shoulder massage from NYPD and an "It's ok, don't worry about it."

Cyclists, beware of ticketing in the immediate area. NYPD claims they are not going to engage in that kind of vile bullshit anymore, but--surprise--I don't believe it.

Aw I know that woman. Get well soon.

I was at that very intersection a few hours before the accident when a black SUV was trying to u-turn there and I remember feeling uncomfortable because I couldn’t immediately tell what the driver was trying to do or where the car was headed....

I agree the NYPD and DA need to find a way to more aggressively deal with reckless drivers (and bicyclers). I suppose they are waiting for the self-driving cars to put force human drivers off the city streets....