The Sunshine is gone, and an empty lot awaits a 9-story office building 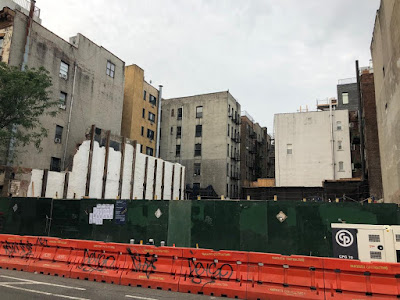 Workers have finished the demolition of the circa-1898 building that last housed the Sunshine Cinema here on East Houston between Forsyth and Eldridge. 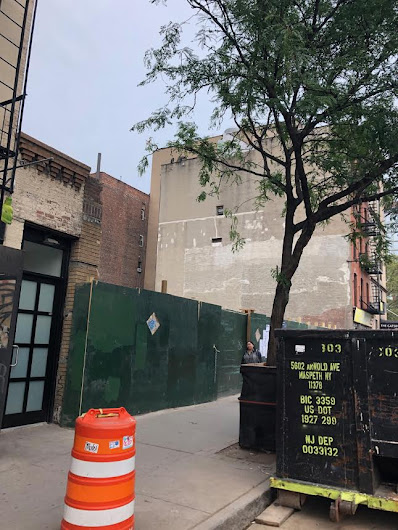 The lot has been cleared ... and all the scaffolding and sidewalk bridge have been hauled away for the time being. There's a clear view of Yonah Schimmel Knish Bakery next door now too. (Open daily from 10 a.m. to 7 p.m. Stop on by!) 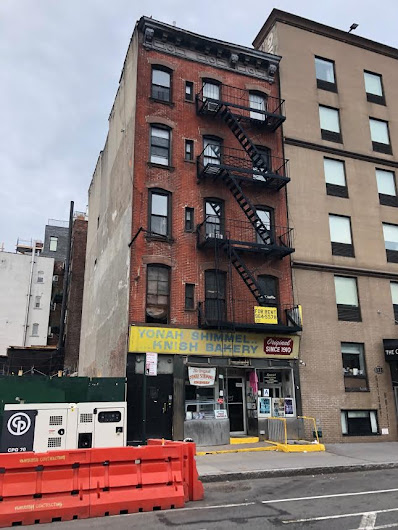 The halt in construction is only temporary, though. The newish owners of the address, East End Capital and K Property Group, have approved plans to erect a 9-story office building. Our previous post has more details on what's to come. 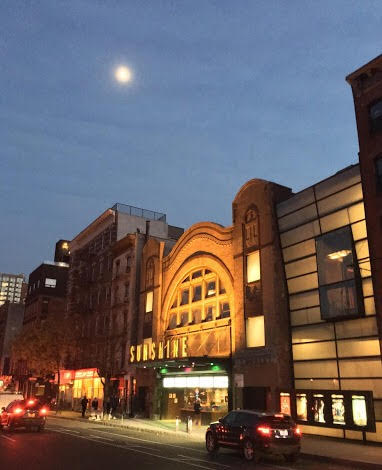 The boutique office building replacing the Sunshine Cinema will be 'unbounded by walls' with an outdoor space called Houston Alley
Posted by Grieve at 4:23 AM

I feel bad for Yonnah Schimmel. Perhaps they will have better foot traffic sales? But I fear that activity like a lot of truck deliveries and livery cars for office workers will make it a less attractive place to go.

It's unfortunate that the Landmark did not live up to its name.

Dang, the theater added a lot of visual charm and character. No room for that anymore though, I understand. I'll see myself out.

This was a perfectly good cinema located in a perfectly good building, both of which were part of the social fabric of this neighborhood, so of course it was closed down and the building destroyed, because that’s who we are. We have no patience or use for the past, because we seem to think we can do things better than everyone who came before us.

If you ever have a chance to go to Amsterdam, you will see many structures that are 400 or 500 years old. The oldest building was built in the early 1200s. There is even a house outside the city that was built in the year 900, and it’s still standing. Many of the buildings in Amsterdam would be even older had they not burned down in the great fire of 1452, which destroyed 75% of the wooden buildings in the city. Afterwards they switched to using brick instead of wood, which is why there are so many 500 year old brick houses, which are far better maintained than our 100 year old tenements, and certainly better than our 50 year old public housing projects.

There are many modern buildings there too, but somehow their architects have figured out how to fit modern architecture into the cityscape rather than detracting from it. Many of these designers are saying our Big U plan to protect Manhattan with a giant wall will not work. Something tells me they know what they’re talking about.

So enjoy this new and unnecessary 9 story office building while it lasts, because it probably won’t be here for long.

@noble neolani - Well, you can thank both the Landmarks "Preservation" Committee and the CB3 SLA committee for that.

How is it that this city let a rare and well-preserved late 19th century theater building be demolished for a crappy-bland investment project?

This act of vandalism says all we need to know about our current city government. They simply do not care about the physical city that surrounds us, and the vast impact that has on us and on generations to come.

De Blasio & his cohort are modern-day vandals, who value nothing at all beyond the $$$ in their bank accounts.

Giovanni's insinuation that Euros are somehow more culturally advanced and sensitive to their architectural heritage is complete nonsense. One need only to look at the demolition of the Marche des Halles in Paris in the 1970's to see their indifference to an Art Nouveau architectural gem of a building complex. It was replaced with the Forum des Halles which has been described as a "soulless, concrete jungle." These types of buildings can be seen all over Europe. Secondly the idea that one SHOULD preserve old buildings is a uniquely western concept. The Asian way of thinking about this is just the opposite. The Japanese actually have a word for this, *shinchintaisha*, which means replacing the old with the new. While the Sunshine had a history of being a church, fight club, movie theatre, and hardware store the building itself is nothing special. I would prefer it to stay a movie theatre but that's not my call. NYC has always been about real estate and money :: Shock::

My understanding is that "shinchintaisha" describes a defunct Japanese architectural movement and not a Japanese way of thinking that we should all live in replaceable pods (as in the Nakagin Capsule Tower), but correct me if I'm wrong.

“Euros?” LOL. I’ll as the “Yens” about that one the next time im in Japan.

Wow, sounds like someone doesn't know that this website is called EV Grieve for a reason. Or has even been to Europe, for that matter. They have some of the oldest structures in the world. Do you know who else has even older buildings? China and Japan. We do not value older things or history at all. That’s why we have a landmark preservation board, to keep the developers from tearing everything else down, and yet even they failed to do their job.

But that’s not the topic here. The topic is why we miss the Sunshine Cinema, which would probably still be open if the block association and community board hadn’t denied them one of the same liquor licenses they hand out to bars like water.

The fact is the failed socialist countries of Europe are not more sensitive to preserving their architectural heritage than the US. Entire sections of Paris were demolished to make way for the Pompidou Center, the Forum des Halles, and La Defense- the latter two which have to be the most ugly ass building complexes I've ever seen. Up until its renovation, by an American lady from California, you'd be better off visiting a swamp in NJ than Monet's garden in Giverny. Fountainebleau and Versailles both renovated and currently maintained in large part due to American money.

And yes, in case you haven't heard, there are profound differences in Eastern and Western thought, society,and culture.

“The failed socialist countries of Europe” LOL! Give us a break. It sounds like someone should start their own blog and call it Euro Grieve

It's complete nonsense that China places more value on their historical sites than the US. They will completely destroy an old community if they want to build a new one. The old section of Shanghai was demolished (that's 500 years of history) to make way for all the shiny new skyscrapers.

@6:35- Greece, Spain, and Italy have a youth unemployment rate of around 35%. Yellow Jacket riots in France are now in their 38th consecutive week. Any clue to what their protesting??.....(psst...their governments failed socialist policies)

I remember when that stretch along Houston had a empty lot (now a small Hotel) a strange little pet store,the potato knish shop and this building which was used to store flour for some bakery business the rest of the block was abandoned store fronts. At one point a cafe/coffee shop opened opened on the corner in the eighties I think.
The Sunshine added a lot for cinema goers and a little local color for the neighborhood. The blight of the area is gone along with the strolling Ladies of the Night. The East Village Theater on Second Ave and 12th Street remains once a synagogue which was boarded up for a long time then made into a movie theater.
They no longer play "double dutch" on the sidewalks of New York. I grieve for Shima which was across the street it was my Saturday Brunch stop replace every few years with God only knows what.