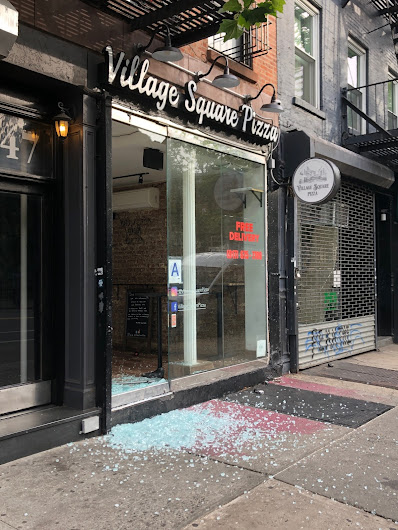 Two businesses on Avenue A between Ninth Street and 10th Street were burglarized last night.

The front door was smashed in at Village Square Pizza... not known at the moment what was taken... 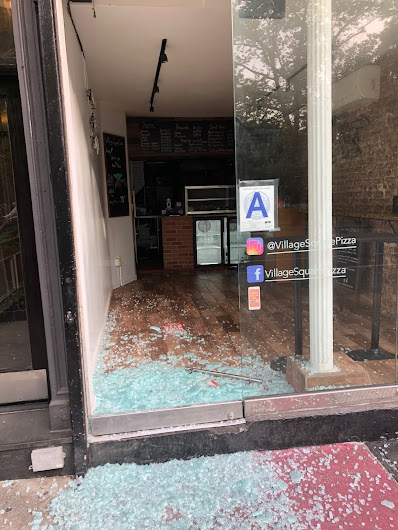 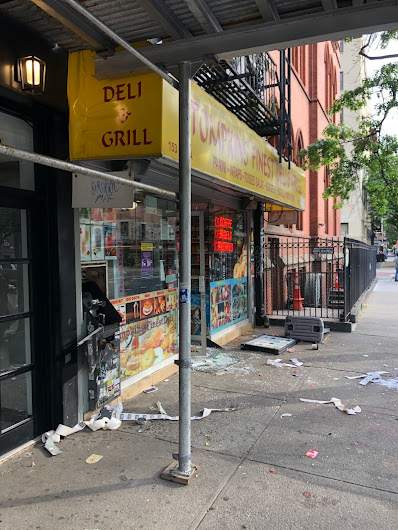 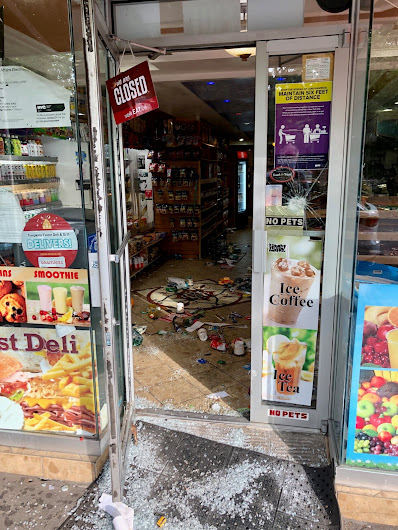 An EVG reader sent this message just before midnight:

Called 911 23 minutes ago about a group of people breaking into bodega on Avenue A ... they still haven’t come. The looters filled up a car full of shit, threw the register into the street and bragged about where they are heading next.

And in a subsequent message: "No cops have come. And they’re long gone."

Given the timing of the break-in, this occurred roughly 30 minutes after the start of last night's 11 o'clock curfew.

These are the latest break-ins in the East Village. A group of seven men burglarized more than a dozen businesses late Sunday night.

Where is the 9th Precinct? Where are our elected officials?

They only go after peaceful non violent protesters

Dollars to donuts this is by people enabled by cops.

It’s just so fucked up. Why would someone loot bodega or local pizza place? Or any other struggling local business after a crazy pandemic? It’s low and disgusting. Those people are not from EV.
I can’t even express how low it is.

This is so fucking terrible and disgusting. I am outraged with the violence and vandalism in our beloved city and around the country. No business deserves this kind of destruction! Welcome to our new world. Where are our leaders? Where are the cops? Where are our senators? WTF is going on? This is no longer about George Floyd. This is about complete and utter anarchy. It's out of control. I live in Alphabet City btw. Should I purchase a gun now to protect myself? Is this what we have been reduced to as community members and neighbors??? I am beyond angry and horrified as many others are. Wow. Just wow. Nothing more to say.

Citizens militia is needed but they've made sure we're unarmed. The National Guard needs to be brought in now.

The cops are standing down. Thanks deBlazio. Well played #BLM you just reelected Trump.

Anyone interested in using peaceful tactics to defend the neighborhood?

So I’m sure these looters know that the security cameras inside the store are capturing everything they do, right? They had better hope those masks did more than just block a few germs. Broadway south of Astor Place and SoHo is a plywood jungle, with bits of glass all over the sidewalks and streets, and the smell of sawdust everywhere as crews cut out pieces to board up the windows. It looks like they may have hit Astor Wines & Spirits which is all boarded up. StarGirl has already tagged much of the freshly cut plywood on Broadway.

My first thought yesterday was that it would be easy for the looters to pull off the plywood and smash the windows, and that’s exactly what they did. Everywhere you go in that area you see storefronts with giant glass windows which makes for a nice target for these opportunists, and while metal gates are less attractive they do work better than plywood, which is easy to remove with a crowbar.

I also heard the call go out on Citywide to all police radios to not pursue looters, especially those driving vehicles, becuase it was too dangerous. So the question is what are all these cops protecting? Why have a curfew and all of these cops on the street if they are only arresting and harassing the peaceful protestors?

Lets be clear: the looting and the protests are two different things. The police need to focus on the violent nighttime looters, not the peaceful daytime protestors.

Giovanni, where can one verify the claim that police were told not to pursue looters? If true, everyone needs to know.

Sounds like police are trying to deal with looting, but are overwhelmed. https://www.reddit.com/r/nyc/comments/gux9tq/61_nypd_citywide1_scanner_thread/

"Lets be clear: the looting and the protests are two different things."

That's not how the media is playing it. If you look at the headlines of all 3 papers today, they are a Trump wet dream fulfilled. Trump will go for his base and bring in any seniors and white suburban women who are now terrified and will now vote for him again. As long as he gets the EC again, that's all he cares about. See Nixon 1968 Law and Order campaign strategy.

i have called 911 at 11:35 pm yesterday, the police arrived 11:45 in a regular black car, but the breakers were already gone. Some of the breakers walked casually towards avenue b eating chips and drinking soda.

Giovanni, I agree! Protestors are targeted uselessly, burglary continues. I don't agree with a curfew, but if there is going to be one, it should target vehicles and especially out of state vehicles which have no business here during a pandemic anyway. And the whole discussion of property destruction is a distraction from the fact that black people still have to fear for their lives, now more than ever.

The looters are NOT protestors - they're agitators bent on discrediting the protestors and distracting us from the actual message, which is all about systemic racism in our culture. Don't let these a-holes defeat us! Keep holding peaceful protests, keep shouting victims' names, keep focus! These people WANT us to fail. Don't give them that.

One sad part is that there is a police van stationed in front of the park on ave A between 7th and 8th daily with around a dozen police officers chatting with each other every day, or at least every afternoon when I walk my dog, I think they are social distancing cops. The reason I say this specifically is that when the skateboarders were in the playground every evening not distancing, I stopped a police car driving by one evening. I stopped the car and mentioned if they would get out and speak to the skateboarders. They said they could not because they were 911 officers and I need to speak to 311 officers. I was somewhat surprised and annoyed. Maybe that's the deal with the police, there's no multi tasking. This may be why curfew last night was a disaster

I am heartbroken for my city and for the family of George Floyd. We are all being manipulated and I am so god-damned tired. Did anyone else see 45's crazy D.C. photo op yesterday when he was again dishing word salad and holding the bible upside down? Start by arresting the other three cops and don't let that piece of racist trash commit suicide. He needs to face what he did: he extinguished the life of an innocent man who he could have just placed in a squad car. Alive. That's intent. That's First Degree murder.

I was absolutely heartbroken seeing this yesterday.

I wish there was something we could do to help these two vendors. The bodega has been boarded up since it happened.

A Godless society is doomed to self destruction. We have lost our moral compass,from the hierarchy on down,and unless a redirection of our collective conscience occurs,tragedies such as the murder of George Floyd,as well as mass insurrection,will continue unabated.