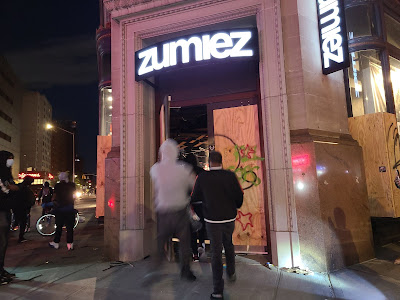 The end of the fifth night of protests in the city saw more damage and looting to businesses in the hard-hit area south of Union Square.

Nearly two hours before the city's 11 p.m. curfew, looters were seen smashing their way into the Zumiez store on 13th Street and Broadway. Photographer Ed Yoo shared these images, saying that "it was nuts." (All photos here are by Ed.) 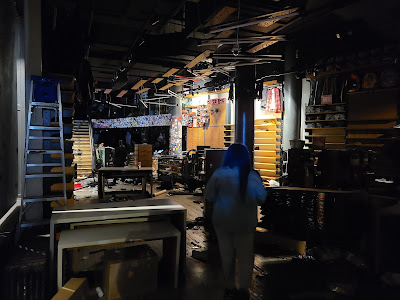 The Daily News has footage of the looters smashing their way into the skateboard apparel shop. They were inside for two minutes before police arrived.

The paper spoke with two of the men breaking into the store:

"It’s not just about George Floyd. It's about people who can't afford things," said one looter, a 22-year-old Bedford-Stuyvesant resident who gave the name Twin Moses. "We're going to sell this stuff back on the street for a lower price. We're getting our own back."

Another looter, who didn't give his name, rushed out of the store with his arms full of hoodies, designer sportswear and skateboards. "They've been beating my ass for 400 years. Now I'm going to buy my own chains. They call me black. Black America," he said. 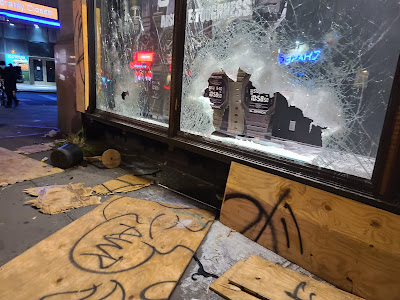 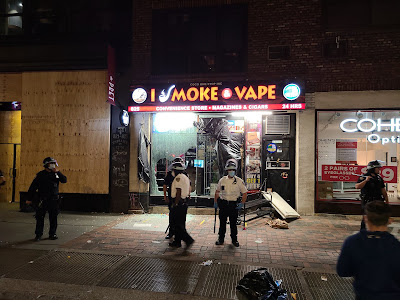 Further south, windows were smashed at the Gap Women, Kmart and Starbucks on Astor Place... 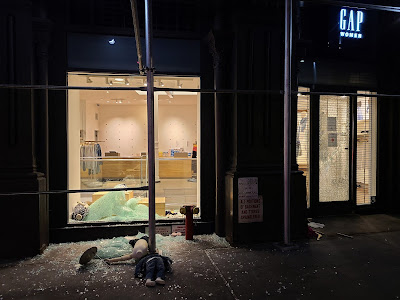 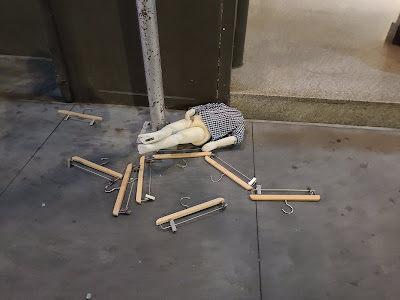 The Astor Place Starbucks appears to have been ransacked... 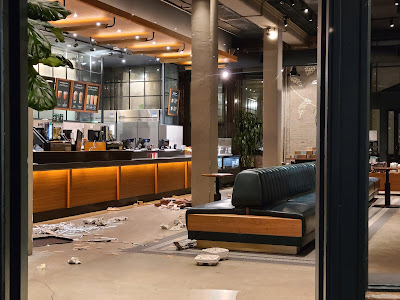 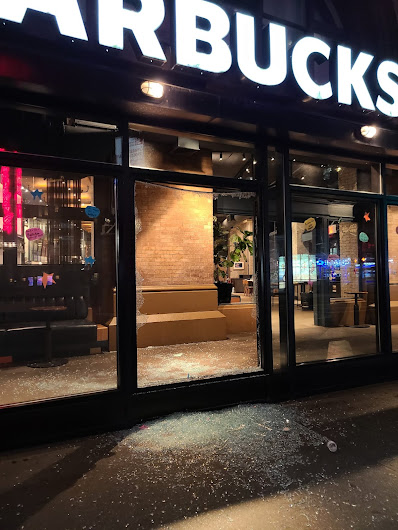 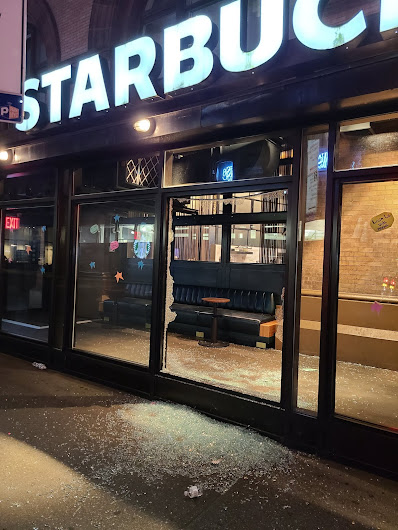 Windows were broken at Kmart, but it's unclear if anyone entered the store... there appears to be security inside... 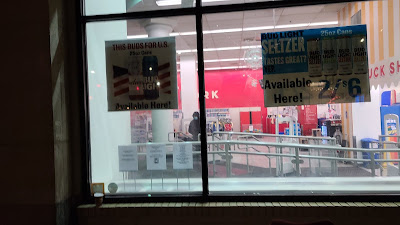 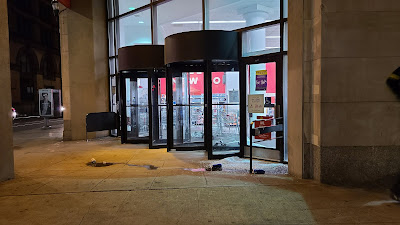 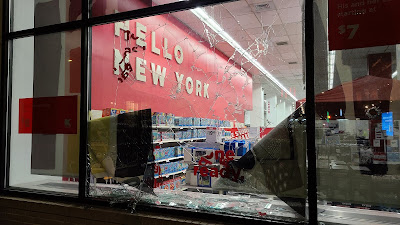 As in previous days, the citywide protests against racist police violence in the aftermath of George Floyd's death were said to be peaceful. However, as multiple published reports noted, as night falls, people use the crowd as cover.

Mayor de Blasio has announced an 8 p.m. curfew for today...

These protests have power and meaning. But as the night wears on we are seeing groups use them to incite violence and destroy property.

Our first priority is keeping people safe, so I’m extending the curfew to Tuesday. It will begin at 8pm.

Wow, the looters are now giving interviews to the Daily News?! This city is completely out of control.

BTW, I have a friend who lives in midtown (in the 50's, west of 5th Ave.) and that block had extensive looting last night. My friend said they saw the looters pull up in cars, break in, carry stuff out to their cars & drive off - professional, cool as anything. Police were called multiple times; my friend said they observed NYPD cars DRIVE DOWN THE BLOCK but without interacting with the looters.

To me, this represents the complete failure of the NYPD and all of NYC administration.

Outpouring of rage and frustration but also of desire, greed and probably some boredom and cabin fever.

@1:41pm: "probably some boredom and cabin fever"?? Are you kidding me? Those are plausible reasons now?

I've been inside my apartment for nearly 10 consecutive weeks and yeah, I have cabin fever, so does that "permit" me to go loot a store? Please reply, b/c I'd hate to miss out on any freebies I might be "entitled" to grab for myself to compensate me for my cabin fever. I just have to dust off my crowbar; I know it's here somewhere...

Now add in people who want to mug others b/c they're "bored" and we have the full panoply of the most pathetic excuses I've ever heard.

Interesting to note the looters are not from the area . Most come from other boroughs and the ones you see in cars come from nj some come from out of state . They are destroying the neighborhood.

The Port Authority should CLOSE off the entrances/exits to all its bridges & tunnels and let cars through, one at a time, AFTER the police search the trunk of the car & the back seat. That would likely make quite a difference.

The main job of the Police is to protect the public not act as security guards for overpriced merchandise in a bunch of corporate owned retail establishments that are heavily insured. The NYPD did what they could but public safety must come before private property.