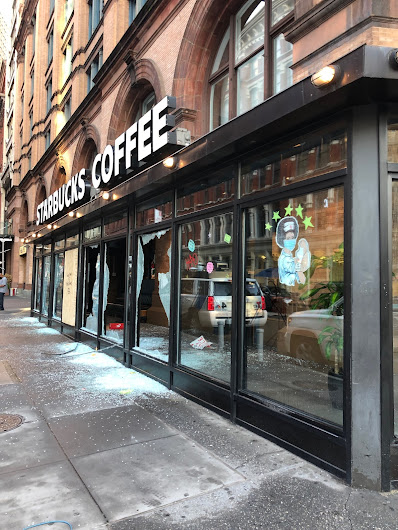 For the second night, people smashed the windows at the Starbucks on Astor Place... here's a look at the space this morning... 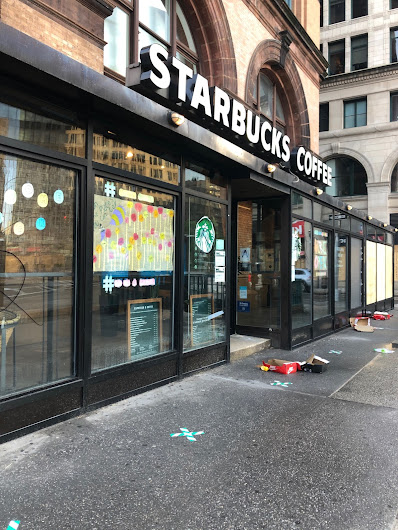 The Foot Locker around the corner on Broadway was reportedly looted, which explains the empty Nike boxes spotted here... 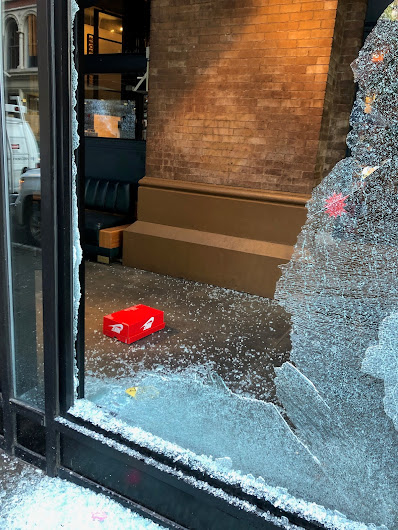 Overall, ABC 7 described it as "a quiet night in New York City, with looters largely absent."

The NYPD used several tactics overnight to crack down on the looting that has plagued the city in recent nights, including arresting non-protesting groups of people after the 8 p.m. curfew went into effect.

If police approached those groups, officials say, many tried to run. Police say they found items like bats and hammers on those they arrested.

The NYPD is reporting 280 arrests.

And some of those arrests occurred on Astor Place and St. Mark's Place, as the NYPD rounded up protestors, and people using the protests as cover, out past the designated 8 p.m. curfew, which is in effect through Sunday. Journalist Bucky Turco reported what he saw via Twitter...

During a short walk through the neighborhood this morning, we didn't spot any signs of break ins or damaged storefronts ... outside of the AP Starbucks... 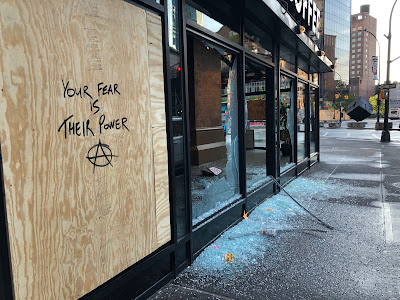 Starbucks, one of the great employers of young people and also provided bathrooms during the Iraq antiwar marches.

Far better some mediocre chains get looted than more local businesses. Regardless, this whole situation is appalling. ACAB.

If you want to protest, do it peacefully during the day.

Arrest any groups wandering at night, the trashing of our neighborhoods needs to stop.

This is entirely the fault of the NYPD

This OUGHT to be unacceptable to EVERYONE. What is wrong with NYPD? They seem determined to show that they are incapable of dealing with this.

I guess if they can't set up a huge light-tower for weeks in one spot to intimidate an area, they can't cope. Looters aren't going to stand still for you, NYPD!

Meanwhile, a few blocks down on Broadway, Curtis Sliwa and a few Guardian Angels tried to protect the Footlocker Store from 300 looters, and a couple of the Angels including Sliwa were seriously injured. They told the Daily News that the cops never even showed up, but a few were seen in the distance nit intervening. This was the biggest instance of looting in the neighborhood last night and it confirms the stand down order which was broadcast over police radios and is rumored to have come from DeBlasio himself a few days ago. So why do we have so many cops on the street if they are being told to stand down? Most of the smashed windows (like this one at Starbucks) are being used as a distraction by the organized looters, many of them riding around scouting on CitiBikes and Revel scooters. But the stand down order means they don't even need to create mayhem as a distraction, they can just loot as they please.

DeBlasio is a total failure, from helping the homeless to protecting our neighborhood(s). His daughter, instead of speaking up at a rally to promote calm, peace and justice, gets herself arrested and then pulls the I'm the Mayor's daughter get out of jail free card. Will her police record be expunged or will it stand against her for the rest of her life like other legitimate protesters who were arrested? Anyone want to take bets?

Please stop. They did nothing wrong. Why you guys do this bad thing. Amazon, Foot Locker and now starbucks.