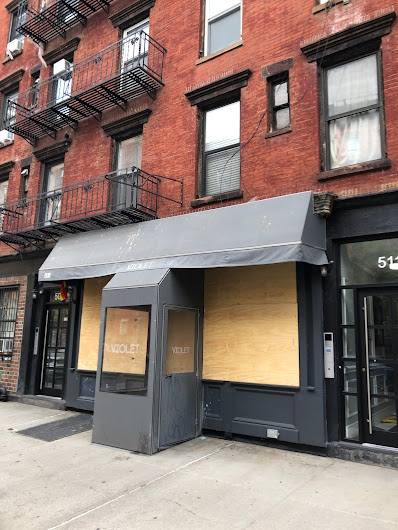 Violet, the restaurant by the Pizza Loves Emily Group and chef/owner Matt Hyland, will not be reopening after the COVID-19 PAUSE here at 511 E. Fifth St. between Avenue A and Avenue B.

Eater had the news yesterday about the spin-off from Emmy Squared and Emily:

[I]t wasn’t the runaway hit of the chef’s past restaurants. The restaurant built its menu around the grilled pizzas made famous at Italian restaurant Al Forno’s in Providence, Rhode Island, and critical reception was tepid. Eater critic Ryan Sutton found that the toppings-saturated pies at Violet often missed the mark, while New York Times critic Pete Wells praised the pizzas but saw some flaws in the pasta and dessert lineup. The restaurant, which opened its doors in January 2019, also featured pasta and seafood dishes like spaghetti with clams, and grilled shrimp with spicy butter and cilantro.

Hyland called the restaurant “a fun experience” in a statement on the closure, but said that Violet wasn’t feasible to run “in a New York that is increasing drastically in cost of goods and wages.”

FWIW, I liked the pizza, and it was a good spot after a drink at Sophie's a fews doors away.

The address has been home to several restaurants since Le Tableau closed in December 2007. Before Violet, there was Goat Town, Seymour Burton, Butcher Bay and GG's.