Violet ready to roll out the grilled pizzas this week 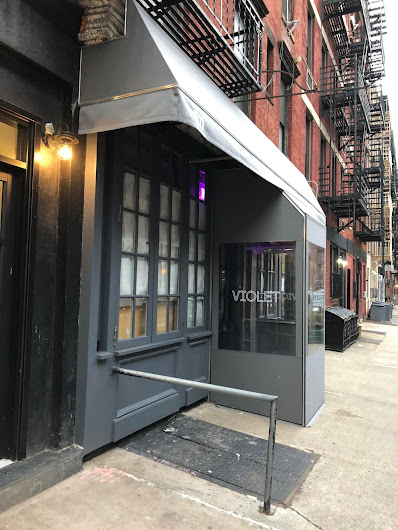 Violet, a new restaurant by the Pizza Loves Emily Group and chef/owner Matt Hyland, is ready to debut this week at 511 E. Fifth St. between Avenue A and Avenue B.

The Violet website shows reservations starting on Thursday. (This after some friends/families previews.) Google also lists a Jan. 10 opening ... as do various social-media posts.

Here's more about Violet, named after the state flower of Rhode Island, via the restaurant website:

The menu highlight, grilled pizzas, are inspired by his nostalgia for Al Forno in Providence, where he and Emily often ate while attending school in Rhode Island and his desire to fill the void of grilled pizza destinations in New York City. The pies grilled over a hybrid gas and wood grill featuring seasonal and innovative twists on classic toppings. Small plates with a focus on New England seafood favorites, and a rotating selection of fresh, house-made pastas round out the shareable menu.

The Hyland's opened Emmy Squared this past July on First Avenue at Fifth Street.

Name reveal: Emmy Squared's grilled-pizza sibling will be called Violet on 5th Street
Posted by Grieve at 4:22 AM

We're hitting peak pizza within 5 blocks of this place.