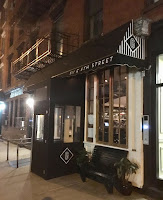 As previously reported, GG's ends its three-year run tomorrow on Fifth Street between Avenue A and Avenue B.

Owner Nick Morgenstern told Eater that business is good at GG's, but he and his partners want to focus on new projects, such as a restaurant for the Ace Hotel on the Bowery.

Here's the message GG's left on their social media....

For the past three years, GG’s has proudly served the East Village with the highest quality of pizza, drinks and service possible. We are grateful for the many meals and memories that you have shared with us.

After much consideration, we have decided to hand over the keys to 511 East 5th St to a new owner and operator.

This means that GG’s will close its doors permanently on Saturday, December 23rd.

We are proud of the success that GG's has seen over the years, and we're excited for what our individual futures hold.

It has been a joy to serve our friends and neighbors every day...

Something relatively similar will be taking over — Emmy Squared. The Williamsburg pizzeria serves Detroit-style pizza via the wife-and-husband team behind Emily on Downing Street.

No word on when they might be open for business here.

The address has been home to several restaurants since Le Tableau closed in December 2007. Before GG's, there was Goat Town, Seymour Burton and Butcher Bay.

Previously on EV Grieve:
GG's looks to be yielding to Emmy Squared on 5th Street
Posted by Grieve at 8:06 AM

perhaps....
the new owners (if they have time to operate between lawsuits) will do better...
from NYC site:
Violation points: 26
Sanitary Violations
1) Cold food item held above 41º F (smoked fish and reduced oxygen packaged foods above 38 ºF) except during necessary preparation.
2) Evidence of rats or live rats present in facility's food and/or non-food areas.
3) Evidence of mice or live mice present in facility's food and/or non-food areas.
4) Food contact surface not properly washed, rinsed and sanitized after each use and following any activity when contamination may have occurred.
5) Facility not vermin proof. Harborage or conditions conducive to attracting vermin to the premises and/or allowing vermin to exist.
seems that the EV is attracting a peculiar type of restaurateur!

I guess if you don't mind a bit of filth that might lead to a hopitalization, the food wasn't bad. Ok.

#sanitaryshaming ... nice research, you should be proud.

They SHOULD be proud. Research has never been easier, yet so many people don’t bother.