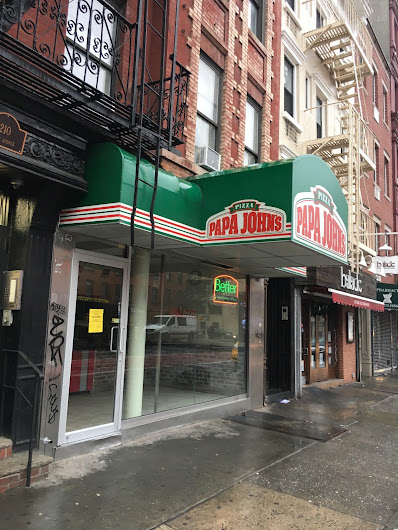 Several EVG readers pointed out that the DOH closed the Papa John's outpost on First Avenue between 12th Street and 13th Street after a failed inspection on Tuesday.

During a follow-up on Thursday, public records show that inspectors found at least one critical area to keep the shop closed. (That being "Evidence of mice or live mice present in facility's food and/or non-food areas.")
Posted by Grieve at 11:26 AM

"In addition, health inspectors found hair dye running down the face of the pizza when it sweats."

The bugs are probably the healthiest thing in there

why does anyone eat here in the first place? besides having an owner who is one of the worst boss' ever its disgusting even without mouse feces in it.

Maybe this is the real reason the CEO just yesterday announced he is stepping down?, only a guess

What self-respecting New Yorker would ever eat this slop?

if you live in nyc and eat here you suck.