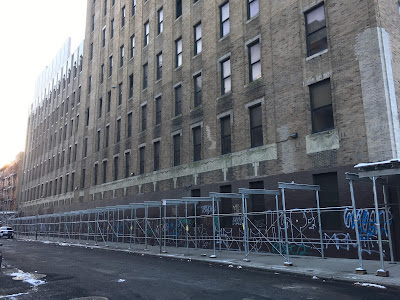 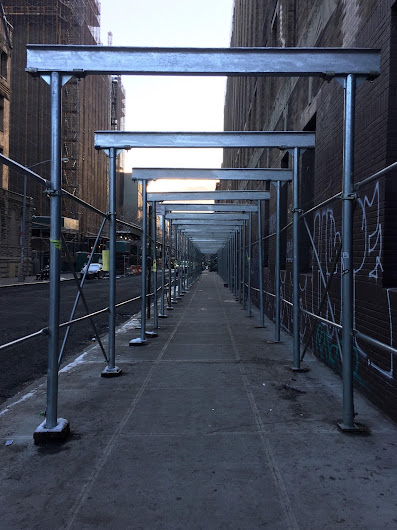 And it was all gone by the end of the day Monday... 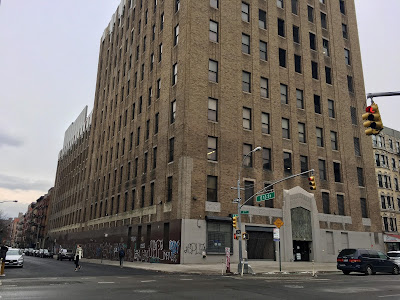 As we reported on Nov. 28, several residents pointed out that a growing number of travelers/crusties had been living under the sidewalk bridge for the past few months. A small fire on Nov. 26 temporarily brought an end to the encampment, as city workers tossed the mattresses and other found items.

One reader said of the pre-fire conditions:

They live and sleep there. They openly shoot up, get drunk, fight, party all night and block the sidewalk with mattresses, chairs — even tables.

The situation has become a total nightmare now.

According to nearby residents, it didn't appear that any construction work was even taking place in the building, that the sidewalk bridge was seemingly forgotten. (Verizon blamed the Department of Buildings for delayed inspections, per PIX 11.)

In any event, now that the sidewalk bridge is gone, will we see a return to the brown paint wars? 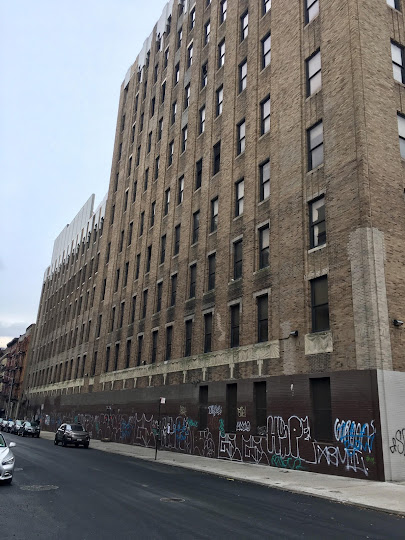 Previously on EV Grieve:
Fire under sidewalk bridge on 13th Street temporarily brings an end to homeless encampment
Posted by Grieve at 4:20 AM

I hope the next round of graffiti has a lot of sloganeering about the telecoms lobbying against net neutrality and for tier pricing.

Aww what a shame, the Crusty Hilton was shut down. Oh well there's always the Moxie coming next year.

Scaffolding just got put up across the street on the north side of 13th now. Not as long as the verizon building’s bud my does the city know how to impede a good walk.

@Gojira I heard the beds at the Crusty Hilton were even more comfortable than the ones at the Moxy, and they even let kids stay free.