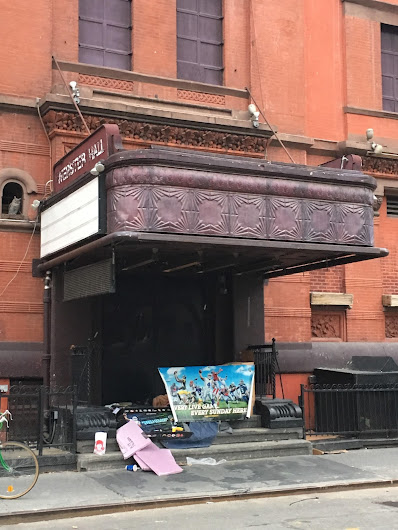 Reps for the newish owner of Webster Hall filed the necessary permits with the city yesterday to renovate the landmarked building on 11th Street between Third Avenue and Fourth Avennue.

Plans include interior demolition and structural work to help upgrade the facility and make it ADA compliant.

The Washington, D.C.-based Martinez+Johnson Architecture is listed as the architects of record. Per their website, the firm brings "their design sensitivities to cultural arts and institutional projects." Their work includes the restoration of the Kings Theatre in Brooklyn and the Boston Opera House.

Webster Hall closed on Aug. 10. Brooklyn Sports and Entertainment, along with AEG-backed The Bowery Presents, bought the building from the Ballinger family for $35 million in the spring.

The new owners will renovate the space, dropping the club nights to focus on live music. Some reports suggest that the new venue won't be ready until 2020. Billboard reported that there may be a name change here too.

While we freshen up, we’re going to bring you moments from your favorite Webster Hall artists. Sit back, relax, and enjoy the feed. pic.twitter.com/4pR1LqR8xp


This was the last tweet from Oct. 26. Not sure where those moments are.

The Kings Theatre renovation is beautiful. I still haven't had the chance to visit but would like to. I'm glad that it will remain a music venue. They could come up with a new name or call it The Ritz.

Since the Moxy Hotel is opening across the street, they could just call The Roxy.

It will be a new music venue for big artists only as they are getting rid of The Marlin Room and The Studio (so basically it'll be like it was before they created those two rooms.)

Then again I could see them not having live music at all save ultra-exclusive lottery-type shows e.g. Jay Z, Madonna, etc.

How are they making back their investment on $25-40 live music shows where most people don't buy drinks?