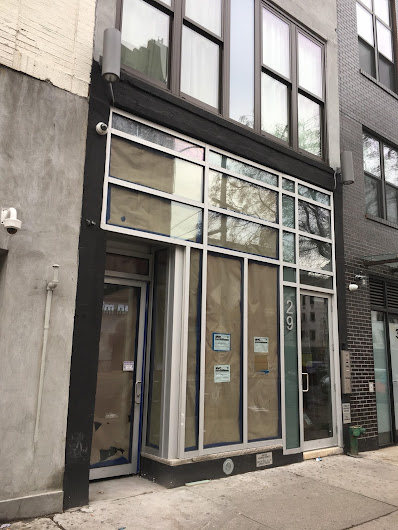 Late last month we noted that a pizzeria was coming to the empty retail space at 29 Second Ave.

Reps for Neapolitan Express are on CB3's SLA committee docket in January for a beer-wine license for the space between First Street and Second Street. As of now, only the application, which doesn't provide as many operational details as the questionnaire, is on the CB3 website.

Neapolitan Express, a growing chain that started as a food truck in 2013, is also opening an outpost adjacent to the Ed Sullivan Theater in Midtown. Their other locations are in East Harlem and on Wall Street.

Previously on EV Grieve:
Pizza in the mix for former Cock space on 2nd Avenue
Posted by Grieve at 5:41 AM

a trendy pizza shop funded by a multi-millionaire republican corporate raider and ex-oil tycoon. that's what passes for small business in the new nyc. you can't make this stuff up.

Oh goody, yet more pizza, brought to us by someone as Italian as the fire hydrant across the street from my apartment!

Things I don't want my pizza to be:

Trump World by the slice. I'm already gagging on it.

Why not create a megaslice? LOL @ a pie being in the shape of a slice.

Oh come on,’how bad can the place be when they offer a pizza named after Wall Street with shaved urbani black truffles for just $50? Welcome to BroDeo Drive.

This is a joke. If it was possible I would buy a beer for the first comment.

There will be more of these pretentious artisanal eateries than before thanks to the ratified tax cuts for the rich aka the Oligarch Welfare Law. Since the majority of these eateries are owned by nameless LLC's. The real burn is that these glorified dumps will be able to take advantage of the commercial rent tax break law that de Blasio took 4 years to sign.

This is going to fail anyway, all the spazzy newbs prefer two bros even given their reckless spending habits and stupid ass food photographing.

It looks like a cat took a dump on that pie too. Mama celeste pies are bigger.

I've had it for lunch a couple times. Honestly, it's decent pizza, and while not cheap, not insanely priced, either. The truffle pizza is just a dumb stunt.

Why so bitter about EVERYTHING people?

2:37 PM: We've discovered that you can never be too skeptical. MAD Magazine had it right.

I like the pizza place on West 3rd and MacDougal. That should debunk your bitter about everything theory 2:37

I reiterate, these corporations are going to use, which they have clearly have doing already, trendy eateries for pass through income that will be less taxed and even more less taxed thanks to the new commercial tax break signed by the day mayor.

Because pretentious pizza goes against everything pizza?