Report: The SBS15 has the worst on-time arrival in the MTA fleet 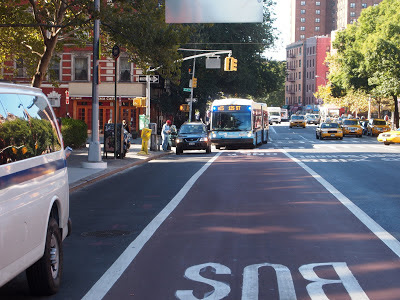 Comptroller Scott Stringer’s office released details back on Friday on the city's slowest and most chronically late bus routes.

A familiar route is atop one of the lists. As the Post reported, the analysis tagged the SBS15, which goes between East Harlem and South Ferry via First or Second Avenue, with the worst on-time performance: 34 percent.

You can read Stringer's full report here.
Posted by Grieve at 4:30 AM

Yep. I take the local M15 because the SBS15 isn't worth the hassle. At times, it even takes longer to get to where I need to go than the local, which has more stops. There doesn't seem to be any management of the schedules and the drivers just don't care.

Maybe one day in the future, the MTA will come to realize that timeliness is something that uh, matters to riders. Their drivers certainly are not aware.

If Cuomo HAD to ride a bus, you know the bus service would improve...