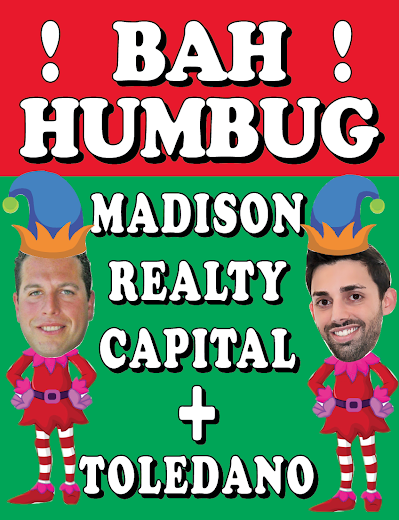 The following is from the EVG inbox via Tenants Taking Control ...

A festive group of holiday carolers from the TTC (Tenants Taking Control, formerly the Toledano Tenants Coalition) visited the Midtown offices of Madison Realty Capital on Monday morning. But the songs they sang were much more ironic than celebratory.

"Madison is Coming to Town" was sung to a familiar tune, but featured such lyrical enhancements as "♫ They’re making a loan ♪ They’re raising the price ♪. They’re funding a landlord who’s not very nice ♫ Madison is coming to town ♪" 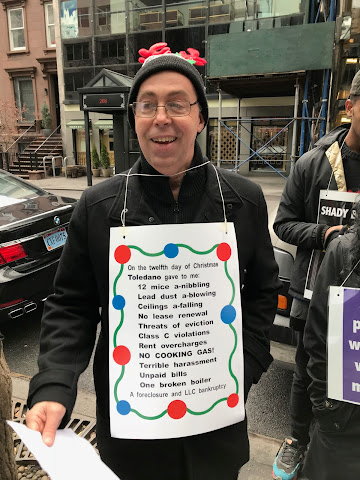 In 2015, Madison Realty loaned $124 million to Rafael Toledano, a 25 year old with no track record as a landlord and a conviction for aggravated assault, so that he could buy a "portfolio" of 15 buildings in Manhattan, mostly in the East Village.

Through demolition that generated lead dust, outright neglect of the properties, aggressive buyout offers and threatened lawsuits, Toledano removed about a third of the 450+ rent-regulated tenants from those buildings before defaulting on Madison's loan and then facing foreclosure in February 2017.

On Monday, the group of remaining tenants also sang "I Had a Little Landlord" (to the tune of "I Have a Little Dreidel"). One verse went: "♪ I had a little landlord ♫ He bought the place one day ♪ He got a check from Madison ♫ And then he couldn’t pay! ♪"

The LLCs once controlled by Toledano staved off the foreclosure in March 2017 by each declaring bankruptcy. Through bankruptcy court, control of the buildings was given over in April to Silverstone Properties, the property management arm of... Madison Realty Capital. If you think that sounds kind of circular, you're not alone. It's a bit like singing a round.

In May 2017, the New York State Attorney General's office filed a massive objection (PDF here) and declaration, accusing Madison Realty Capital of practices “Consistent with a Predatory ‘Loan to Own’ Business Model.” The filings dissected the striking irregularities of the deal. Among other oddities, it references...

• "fatal flaws" in the underwriting of the loan, as evaluated by the NYC Department of Housing Preservation and Development. • clear evidence that Signature Bank (an investor in the loan) foresaw that Toledano would default, and that Madison was well positioned to take over the properties.
• floor plans for the apartments that show newly-added, windowless bedrooms, which are illegal in NYC.

Bankruptcy court hearings regarding the case have been repeatedly postponed by Madison since the AG and the DHCR's Tenant Protection Unit publicized through its filings that the ongoing investigation of Toledano had been expanded to include Madison. 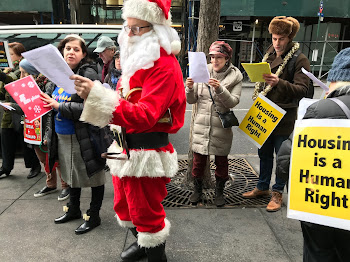 On Monday morning in Midtown, Santa Claus himself made an appearance. He had a special gift for the principals of Madison: Gift-wrapped little sacks of coal. Bellowing loud enough to (possibly) be heard on the 37th floor, he pronounced that the company had been naughty. 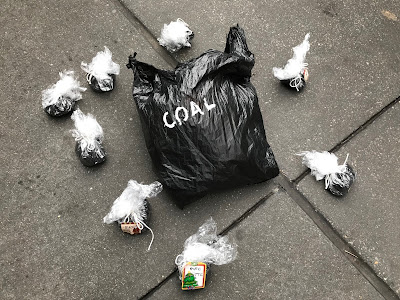 Previously on EV Grieve:
Amid claims of being a rent-stabilized tenant, Raphael Toledano faces eviction from his home
Foreclosure notice arrives on Raphael Toledano-owned building on 12th Street

450 tenants forced out. they should all be given one of the renovated units when ready at the same price they were paying annually for rent. But that would be real justice and we all know that in the world of real estate that justice of this nature does not exist. Mayor de blasio could care less about you.

Fake news! There’s no way that Raphael Toldeano’s body is that big in real life, and his head is much smaller too.

What is even more phony is that Madison Reality Capital actually thought we would all fall for this parlor room trick of lending $124 million to a skinny 25 year old Smurf look-a-like with no track record as a landlord and a conviction for aggravated assault to buy up 15 buildings. They played out this little soap opera in the press, where Toledano supposedly swooped in and stole the deal away from his uncle, when all along he was just the frontman whose job was to clear out tenants to jack up the rents.

The real estate press went along with it, with glowing interviews with Raphael Toledano’s meteoric rise from nothing to real estate mogul overnight. Along the way, no one questioned how any of this was possible for a guy who dropped out in the 9th grade. After all, it was the American dream; all you have to do is get someone to lend you $124 million, and you too can be lousy East Village real estate magnate. But the numbers never added up. As The Real Deal noted, “New York City multifamily deals are leveraged at an average 50 to 65 percent — Toledano’s deal, by comparison, comes out to 128 percent.” In other words, there was no way for this amazing “deal” by this real etate “genius” to ever succeed in the first place.

None of this made any sense, but the real estate press played right along. One headline in The Real Deal blared ”At 26, Raphael Toledano has gone from being a high school dropout waiting tables to one of the East Village’s biggest landlords“ As Raphael Toledano himself said, “It doesn’t make sense that I own the Village,” he said emphatically. “I didn’t finish ninth grade. I don’t have any investors or partners. I own a half-a-billion-dollar portfolio.” In a rare moment of stillness, Toledano paused. He then added: “There’s a reason and a destiny.”

Along the way, Toledano picked up fanboy trolls who came out to extol his business acumen and genius every time another negative story hit. They insisted it would all work out in the end and that Toledano would make millions, as if they had money riding on the outcome. Ironically, he is back in court, this tome with his landlord, and being evicted from a rented apartment, which he claims is supposed to be rent stabilized. That’s right, this real estate genius is a rent stabilized tenant fighting an eviction. His empire is gone, his alleged hundred million dollar investment from some rich heir to buy up the West Village has mysteriously evaporated into thin air.

In the end, the press, the public and everyone else who got played were just useful idiots in Madison Fake Reality Capital’s vulture capital business plan in which there was no way for them to lose and no way for Toledano or the tenants living in cramped apartments with toxic dust and windowless bedrooms to win. It was a rigged system from the beginning, made possible by fake news and a frontman designed to implode as soon as the buildings were softened up for more apartment turnovers and rent hikes.

Toledano, Croman, Kushner etc. The story is always the same. The press loves to rave about these real estate geniuses while ingnoring how they are bending and breaking the rules to make short term profits in a business that requires a more responsible long term perspective. Now Croman is in jail, Kushner is just a frontman for investors as it turns out he only own a fraction of “his” buildings, and Toledano’s big deal is a bust. Hopefully the next time around people wont be so gullible. It is way past time for the New York Attorney General to clean this mess up.

Good for these tenants! I admire their tenacity and creativity. The people will not be silenced!

What does the bank gain from making a massive loan to an obvious fraud? Someone must be making money or this would not have happened.

Great news.
Madison Realty Capital also loaned millions to another local lowlife Gregg Singer who was stiffing his other partners who sued him.

@10:19: You said it well & I agree with you. People are being taken in by the "facade" these self-promoters like Toledano, etc. are putting up. Well, people: TALK IS CHEAP!

Next time someone comes along & boasts about how rich & powerful they are, I hope some reporters will do a deep-dive into their background & financing before bowing down before them & declaring them to be geniuses.

I always personally suspect most of these flashy types to be BS artists, b/c you don't hear the kind of crowing a la Toledano from people who are really running their companies well.

Signature Bank has questionable mortgages with Icon Realty too. Band Bank! Predators!!! Former Senator Barney Frank is on their board. He joined the board once all the press came out about predatory landlords came out. So sad to see the creator of the Dodd Frank Act take the money and run with the big bad guys.

The city is rife with these horrific stories. Somehow money always gets the benefit of the doubt until the mess they create is too horrendous to ignore. It's a lousy system.

The two frat boys who did rafael Toledano's bidding are now at citihabitats . I remember one of them saying once "tenants rights , yeah, they dont have any" . Fuck them.

@Notorious. FYI the whole reason that Trump loves coal mining is because when he was a child that’s what he got in his Christmas stocking every single year,

Not sure about these specifics but the bank can get the collateral they loaned the money for. So again per article, it was a win win, somehow Toldeno makes his outrageous leverage payments each moments, or he defaults and then they own the buildings.