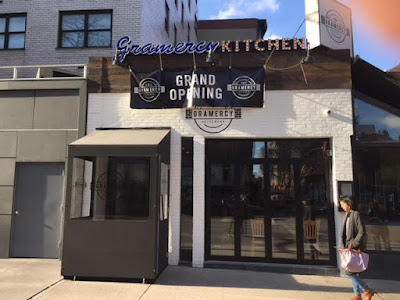 Gramercy Kitchen made its official grand opening yesterday on Third Avenue at 17th Street. (Thanks to EVG reader Harry Weiner for sharing this news!)

The Kitchen takes the place of Gramercy Cafe, which closed in January after 24 years in service. (A few readers felt as if the Cafe's food had declined in recent years.)

Looks as if the owners are going for an upscale diner vibe. From Just Opened New York:

They’ve revamped the menu with elevated classics like creative Coca-Cola drinks and chicken and waffles with balsamic syrup or disco short ribs topped with cheese curds and gravy. 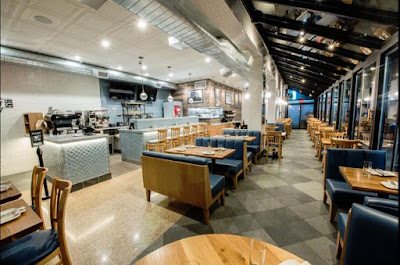 And the Times had a blurb on the opening last week:

Diner-style food prevails here, with an open kitchen, glass tile, a stretch of counter and tables to seat 70. Breakfast, lunch and a dinner menu — featuring chicken and waffles and veal short ribs in a dish very much like poutine — are served

Gramercy Kitchen has a website, though no menu posted just yet. The hours are 8 a.m. to 10 p.m. daily.

what the hell are disco ribs? Will it induce a sudden urge to boogie after consuming them?

I have so many questions. Why if they are trying all of this nonsense did they keep basically the same sign they had before!?!

"...elevated classics like creative Coca-Cola drinks" - um, yeah, sure, I'll be right over.

Chicken and waffles with BALSAMIC SYRUP? That sounds absolutely vile. Not to mention that chicken & waffles is probably still essentially unhealthy for most of us.

Was very disappointed due to the level of incompetence by staff. Order never arrived they all seemed confused. Annoyed and upon leaving
no one bothered to explain. I approach a young man who stated that they are having a bad day??? Real professional? Name was either Anyone or Andre. As a frequent patron of the old establishment felt totally disillusion. They are off to a good start.