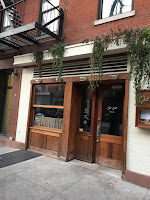 As noted back on Thursday, Out East has been dark in recent nights during announced business hours here on Sixth Street between Avenue A and Avenue B.

The closure continued through the weekend ... and still without any note to patrons on the door or the restaurant's website and social media platforms. Meanwhile, OpenTable shows that reservations aren't available at Out East until Jan. 13.

As Eater noted: "It hasn’t been the easiest eight months for the restaurant, with at least two head chef shuffles already occurring."
Posted by Grieve at 4:23 AM

Email ThisBlogThis!Share to TwitterShare to FacebookShare to Pinterest
Labels: Out East

“without any note to patrons” - Did they have any of those? I walk down that block most nights and almost never saw anyone go into the place.