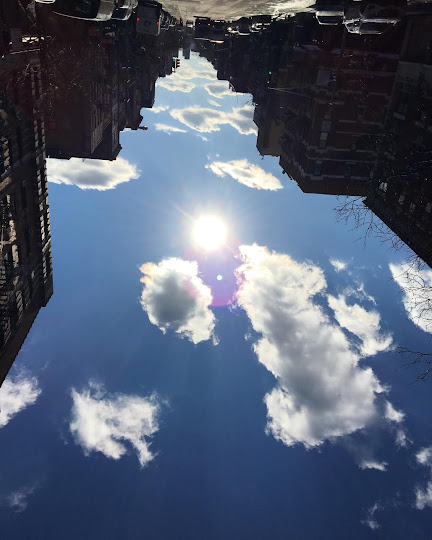 [A view on Avenue A yesterday by Grant Shaffer]

Thoughts on "What About Me," Rachel Amodeo's drama shot in the East Village in the early 1990s, playing Dec. 27 and Jan. 1 as part of MoMa's "New York Film and Video: No Wave–Transgressive" series (The New Yorker)

Incoming vendors at the New Essex Market include a new concept from Radouane Eljaouhari, who ran Zerza (and briefly, the dubious 'Merica) on Sixth Street (The Lo-Down)

Some photos from the East Village Arts Festival at the Tompkins Square Library (Slum Goddess ... previously)

Essex Crossing rental will be named for Sonny Rollins (Curbed)

From the Gilded Age, Christmas in the tenements (Ephemeral New York)

And several EVG readers have shared crowdfunding campaigns currently underway for two East Village residents... Barbara Caporale, a longtime community gardener and activist who has lived in the neighborhood for 40 years, is in danger of losing her home. You can read about the campaign here. There's also a campaign for Jimmy Carbone, owner of the currently closed Jimmy's No. 43 on Seventh Street. The campaign is to help him cover medical treatment and other debts. Read about that here.
Posted by Grieve at 10:30 AM

This guy's blog (Skeetmotis) has some interesting reflection images http://skeetmotis.blogspot.com/search/label/reflection

The library and St. Marks Church both have a history and are unique to our neighborhood. I hear that the library is really working at developing new things. Two cultural institutions that we should support and utilize. I am hoping that PS122 keeps it local, you know-that they are part of the neighborhood and for the neighborhood. And that DeBlasio keeps his committment to us for Charas. I like your friend too and any of the vendors who sell on the street. Enjoy the snow.

There has GOT to be justice for the victims of predatory scumlords. What's going on with those rent-stabilized tenants and the kids and everyone living at NYCHA is a form of affordability cleansing. And it's fucking criminal that the proper authorities are doing nothing about it except letting it fester by their clearly willful indifference.

Like ten minutes ago I ran into Rachel Amodeo at Muzzerella and was telling her how much I like What About Me. It's a very thoughtful portrayal of a person struggling with trauma. I'm always glad to see that her film is being shown again so that more people can experience it. And yes, it's also a nice 1990s EV time capsule featuring many of our favorite local movie stars.