Report: East Village resident looking for justice in the 2005 death of her husband in Iraq 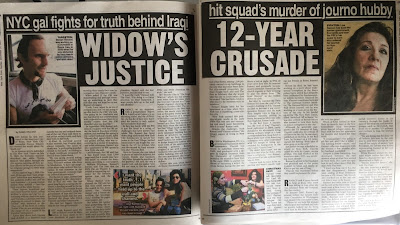 The Post has a feature today on East Village resident Lisa Ramaci, who has spent the past 12 years trying to find out who was responsible for the August 2005 murder of her husband, journalist Steven Vincent, in the Iraqi port city of Basra.

She has spent long hours scouring the Internet schooling herself in the intricate politics of extremist forces in Iraq, and is currently suing the government of Iran and five major European banks that she says financed the thugs who killed Vincent and other Americans.

But now her biggest obstacle may be her own government.

Last week Ramaci sued the FBI in federal court in Manhattan to force them to release hundreds of pages documenting their nearly four-year investigation into Vincent’s death.

When asked if the FBI was stonewalling and perhaps covering up something in their files that they may not want her to see, Ramaci shrugged.

“Look, I was raised in an era of conspiracies but I’m not going to ascribe that to the FBI,” she said. “I’m going to be charitable, and say that they’re just overwhelmed with requests because there is no earthly reason that the FBI shouldn’t give me that file.”

You may read the whole article here.
Posted by Grieve at 10:46 AM

Lisa is a friend and I hope she can find some peace with this. It was such a senseless tragedy.