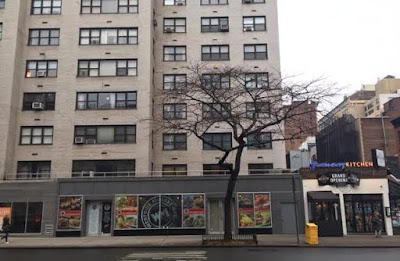 The signage points to a spring opening... 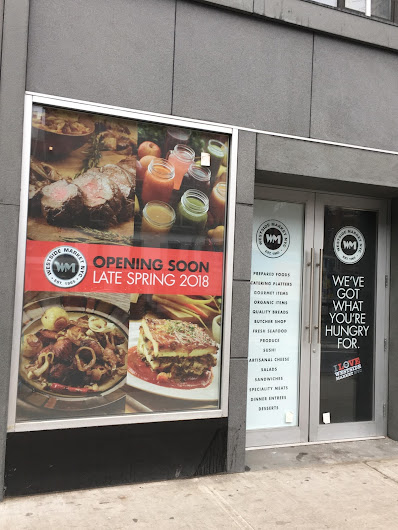 The retail space has been for lease since the longtime Met Foods closed in the spring of 2015.

This is an interesting spot for Westside, the family owned mini chain of markets. The Westside opened in the East Village on Third Avenue and 12th Street in October 2014. Two locations within five blocks?

The Westside location on Broadway near 77th Street closed last month, per the West Side Rag. (As they reported, "the issue was not a rent hike, but [the landlord's] rejection of a plan by Westside Market to rent the available adjacent space.")

This location will be the fifth for Westside. 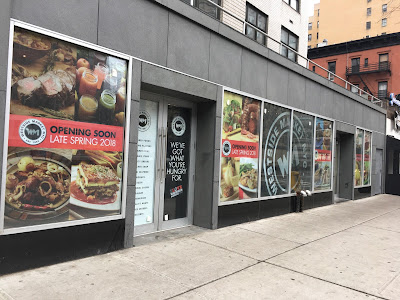 Previously on EV Grieve:
The Met Foods on 3rd Avenue in Gramercy Park is closing
Posted by Grieve at 4:30 AM

Terrific news for the neighborhood. Health Food Store, a block south, has bumped up its game in the past year considerably. Their weekday salad bar is quite good.

But that stretch on the west side of Third (between 16th and 17th) has been empty for months. The Doc-in-the-Box closed (which is too bad, because they were terrific the time I sought treatment). Losing Mariella's Pizza still baffles, and neighborhood chatter for some time pointed to an odd-numbers, convenience-type store opening in its former space. Perhaps residents of Washington Irving House put the kibosh on that.

I wonder what the delta is between the new monthly rent and the amount Met Foods paid. The long game of waiting for the deep-pocketed commercial tenant goes on.

Yech.. they ain't cheap and their produce BLOWS

So does this mean that the Stuy Town Associated on 14th St. is staying in their current location beyond their lease extension until the end of 2018? I thought this would be a good location for them if they moved, so I assume they have made progress on negotiating a longer term lease. This WestSide Market should do well here as the upscaling of 3rd Avenue continues, but its strange to have 2 of them 5 blocks apart. At least it isn't a Citarella, which will charge you extra just to squeeze the produce. Still, this new WestSide Market won’t be affordable as Met Foods, but I guess that’s the whole point.

I agree with 8:24AM, losing Mariella Pizza is still mystifying, the place was always busy and the food was good, but I guess it wasnt upscale enough, and it didn’t have big screen TVs, just an old 15” TV hanging from the ceiling. So now there is Folia’s for $15 wood fired pizzas across the street, or for slices it’s Joe’s Pizza on 14th Street if you don't mind standing up and sharing a table with 10 people.

Just chiming in to say I miss Mariella's too! A lot. Personally I think Joe's is so overrated.

Speaking of pizza, when is Joe and Pat's opening??

I thought the rumor about Mariella's was that the landlord wanted more rent, and used the 'illegally syphoning gas' excuse as a reason to close them.

Honestly not super-enthused about Westside Market going in - if I want something cheap, I'll go to Trader Joe's early in the morning or right before they close (to avoid the lines), and if I want something quickly, I can just as easily stop by the other Westside or Food Emporium - both of which are pretty expensive.

I was honestly hoping that M2M would take up the lease on this space after they were forced to close their location at 3rd and 9th. Sure, it's another grocery store, but the selection was different enough to make it unique, especially as 16th st is far enough away from Sunrise Mart to get different clientele.

Joe's blows. Never had a good slice there, and have given it many chances. Still have not set foot in the 12th St. Westside, guess I need to check it out one of these days.

Regarding Mariella’s. It was not a rent increase and it had nothing to do with syphoning illegal gas. They were venting illegally out the 16th Street side of the building. In other words , instead of building black iron up the entire height of the building ( this would have cost low six figures easy) they cut a box through their 16th street side wall and shot the oven smoke out the side. They got away with for years which I find amazing. Not sure if the landlord used this as the reason to chase them out for higher rent or if DOB stepped in but this is why they are gone. I did check this spot for a potential TSB and yes , the rent was quite high. They’re trying to rent the pizza place and the old nail salon next door as one large space.


I used to live one block from West End Market. I now live one block away from the soon to open location. The area needs this place. It may not be the best but it’s aomething. As of now you have to walk to Food Emporium on Park or Gracefully on 1st and 19th. And the Health Food guy’s produce is not the greatest either. He should have focused on that while he had the entire market.

I enjoyed Mariella’s when in the mood for a somewhat doughy slice. But I am a regular at Joe’s Pizza.
I like their slices and don’t mind the crowd. I enjoy watching the flow of people in and out, the kinetic street traffic, and classic rock.

A yuppie market for the yuppie market. This is who lives there and here now. Boring traditional culture we all ran from. I have no interest in this or the demographic they serve.

Two of these opening 5 blocks apart is a sure sign that a bankruptcy filing is in the cards shortly. I am mystified as to what this place does to make it produce look ripe and tasty, but turn out complete tasteless

This whole block has changed and is totally yuppified now. The corner Gramercy Diner is now the Gramercy Kitchen with a foodie-oriented menu instead of the old diner favorites and standbys. I don’t need balsamic vinegar on my waffles, how about some maple syrup? Old favorite Mariella Pizza is gone, so the closest pizza is overcrowded Joes or chaotic Lunetta pizza near the 13th Precinct.. Folia replaced Mumbles, the food is decent, the prices are higher, and the crowds are yuppified. So now we get a pricier Westside Market instead of Met Foods. The Health Food store is decent but limited, but at least it;s still there. Joe jrs. Diner is still around, the food is good, but you will walk out of thee smelling like bacon. Just because a place looks shiny and new and charges more doesn't mean their food is better, and most times it isn't

Geez. Hating a f-ing supermarket!? Really? It's a supermarket. Get over it. And all this love for Maiella's!? This is a place that was blatantly breaking the law and putting peoples lives at risk. And yet the the old timers gloss right over that fact. Imagine if one of the newer restaurant or bar owners did the same? You'd all be ready to burn him at the stake. HYPOCRITES .

There are so many New Yorkers living in food deserts that it is hard to get in a lather over a new West Side market. It is a mix of pricey and reasonable items. Friendly, helpful staff. I lament that Manhattan is a theme park for the rich. But there is no turning back. Marella’s could have been a gas explosion disaster.

I am really looking forward to this opening. Do the haters have a slow news day?

Anonymous 20 Dec 2:49, I wouldn't be so quick to conclude that this market can't coexist successfully with the 12th St branch. 14th Street is, oddly, a psychological barrier between neighborhoods.