MTA, DOT outline plans for life without the L train 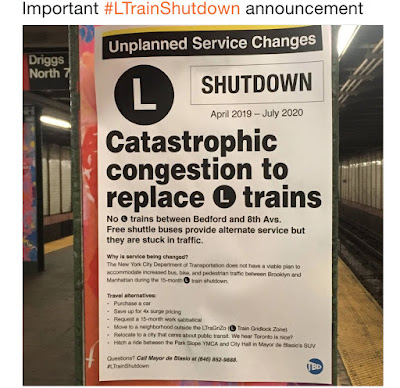 The MTA and the city’s Department of Transportation unveiled the long-awaited plans on how to accommodate the estimated 225,000 people who use the L on a daily basis.

• 14th Street closing to cars from Third Avenue to Ninth Avenue eastbound, and Third Avenue to Eighth Avenue westbound, to become a "busway" with rushphour restriction. Bus lanes and Select Bus Service will be added to that core of 14th Street in the next year, which will bring sidewalk expansion and tens of thousands of square feet in new pedestrian space.

"No street will be more affected by the L train disruption than 14th Street, and changes expanding access to pedestrians, bus riders, and cyclists will play a major role in moving L train riders quickly and efficiently," the DOT says.

• A bikeway running along 13th Street to keep cyclists out of the buses' way. Daily cycling volume is expected to double when the L train closes in Manhattan, so the DOT will add Manhattan's first two-way protected crosstown bike lane to 13th Street.

I know the worst fucking transit system in the universe is making a dutiful effort at being more honest and transparent with their assessments, but calling something that will not start in short of 2 years as something akin to the upending of civilization and society?

Actually, with all the hyperdevelopment and overpopulation as a result from the areas where the stops on that line are, they might be right. If they would have done these repairs like they should have 5 years ago, everybody would not be bitchin' right now.

A two way bike lane is a horrendous idea, even worse on a one way street. Better invest in a couple of pairs of sneakers and a gross of insoles.

Better get more pictures of that sign before they take it down.

so...how do businesses on 14th st get deliveries?

Are bike messengers, package and food, allowed to ride on 14th street under this plan?

Reading on Second Avenue Sagas and their tweets, and apparently, all of these car and lane restrictions are for rush hour only.

Which makes this assessment of the plan on twitter a very strong one:

@ohlukeson
More Luke Ohlson Retweeted Second Ave. Sagas
Bottom line. The @NYC_DOT and @MTA plan, by all early indications, shoots for, "what's a plan ambitious enough to do something but not so ambitious as to upset drivers/people who park/block associations/cranky political clubs."

me said...
so...how do businesses on 14th st get deliveries?

The DOT image for 14th street shows a middle lane for local deliveries.

The city is kidding itself if it thinks ANY mitigation plan will avoid a massive disruption to EVERYONE when the L closes down. Businesses still have to get deliveries (as do residents!), and I'd like to be able to cross the street without needing riot gear to protect me from careless bike riders.

Yes I was right "A block to the south, DOT plans to create a two-way protected bike lane down 13th Street, and Trottenberg did mention they hope to maintain these bike lanes after the shutdown. "

- Purchase a car.
- Save up for 4x surge pricing.
- Move to a neighborhood outside the L train gridlock zone
- Request a 15 month work sabbatical.
- Relocate to a city that cares about public transit. We hear Toronto is nice?
- Hitch a rode between the Park Slope YMCA and CIty Hall in Mayor DeBlasios SUV.

Yes, LOL, this is obviously an Official communication from the MTA, which also stands for Many Trains Absent. The rest of thier mitigation “plan” is just as laughable. If there were a more efficient way to move people around than the subway they would have done it already, It’s probably time to move to Toronto.

So, cars an bikes will be on 13th? That doesn't sound good...would be better to reserve half of 14th for bikes. 13th St is too narrow.

When I try to expand images on this blog on my phone it takes me off the page,so I can't be more speific now.

If only the MTA was as truthful as that poster is!

p.s. dubl-kudos to the poster maker! You are spot on!

@9:27am: Yep, that's DOT for you: put the truck delivery lanes in the MIDDLE of the highway, so that all loading/unloading trucks will be blocking the road while they load/unload - and force delivery people to move goods across bus & bike lanes to get to the sidewalk. Hey, what could possibly go wrong?

Or is there some magic delivery system the DOT has devised, but hasn't announced yet?

This is truly going to be a cluster**** - and worse, they're using our neighborhood as a guinea pig for ideas they're then going to want to spread like the plague to other major cross-streets.

As it looks to me, the DOT is attempting to create as much congestion as possible in as many places in Manhattan as possible, all to justify "congestion pricing". Many avenues are down from 5 or 6 lanes to 3 lanes of theoretically-moving traffic, with DOT persistently ignoring the realities of double-parked delivery trucks, taxis needing to pick up/let off passengers, school buses in mornings & after school, to say nothing of the construction vehicles/materials that are blocking lanes of traffic so that MORE housing can be built for a city that can't accommodate the number of people already here.

This is a city in denial of basic realities. But as long as De Blasio gets to go where he wants with a flying squad of SUV's, the rest of us don't really matter, do we?

People that sign is fake. It’s a joke. Jeez you didn’t even need Russians to fool people around here.

Great poster. I just saw the header and flamed prematurely, got me good. The thing is, that after the MTA's recent announcement of more honest announcements I took this at face value and being up way too early in a freezing apt waiting for the coffeepot to percolate.


I plan on making a printout of that and taping it anywhere I can. Whoever did this is a saint.

Toronto is nice, it's why our new MTA fixer previously worked there. Which may be why this draft looks like it's made for a mini-metropolis.

@2:37pm: Most of our bike lanes are NOT two way. 1st ave bike lane is technically uptown only. 2nd ave is a downtown bike lane. If more people would pay attention to and/or give a shit about this, there would definitely be fewer accidents.

You wanna see a bad 2-way bike lane, check out Union Square. People accustomed to looking north to cross have to watch out from behind. And the turn by 17th street at park ave south has no signal, warning sign or crosswalk. There are also giant potted plants obstructing the lane going west on that same street. Amazing no one has been injured yet that I know of.

Jesus, deal with it, people. It needs to be done. Ten years on, no one will care about the disruption.