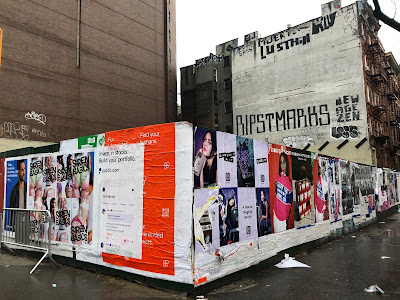 All remains quiet on the eastern front.
In recent months, we haven't seen much, if any, activity at the development site on the northeast corner of Third Avenue and St. Mark's Place. 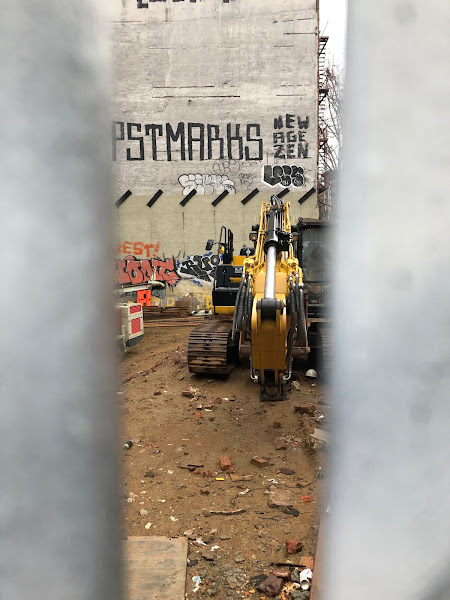 In early October, workers removed the barriers from around the work site... allowing pedestrians to use the sidewalks again — for the first time since the barricades arrived in June 2020.
This past August, The Real Deal reported that Madison Realty Capital was moving to foreclose on Real Estate Equities Corp.'s (REEC) leasehold interest at 3 St. Mark's Place.
Some numbers and background from TRD's report:

A REEC spokesperson said that they "are working on a recapitalization plan and are optimistic that this will be resolved soon." We don't know where this stands now. The rendering has been removed from the plywood, and there aren't any posted work permits.
As you may recall, a 10-story office building had been in the works here. The partially approved work permits dated May 2020 show that the building is now 9 floors — 45,207 square feet in total, with 3,400 square feet designated for a commercial facility.
In October 2020, the City Council's Zoning Subcommittee voted down REEC's application to transfer air rights from the landmarked 4 St. Marks Place to the new building across the street.
With the air-rights transfer, REEC would have been allowed to build 8,386 square feet larger than the current zoning allows here.
REEC picked up the 99-year leasehold for the corner properties for nearly $150 million in November 2017. The previous buildings here, including retail tenants such as Korilla BBQ, the Continental and McDonald's, were demolished in 2019.
For the time being, this gateway to the East Village is prime wheatpaste ad space (Rowing Blazers! Siren Basics!) ... and a corner to watch in 2022.
Posted by Grieve at 5:00 AM

So much nicer as a hole in the ground for years so the rentiers can keep rentiering.