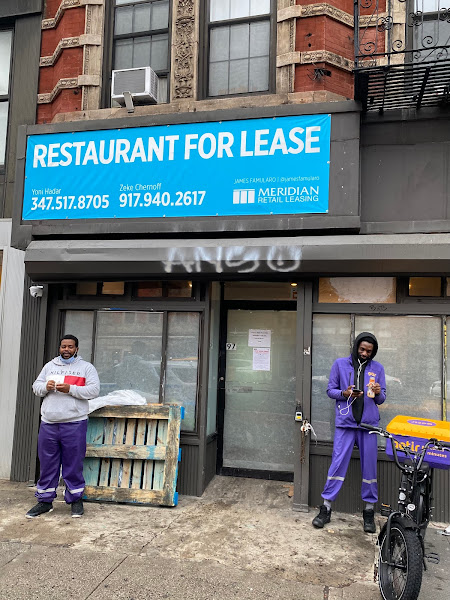 The Istanbul-based Getir, the "ultrafast grocery delivery company," has set up a distribution outpost at 97 Second Ave. between Fifth Street and Sixth Street. (Thanks to Steven for the pic!)
Getir launched its NYC app service last month and plans to expand to more neighborhoods in the year ahead.
Here's some blah-blah info about them via their arrival missive:

The company revolutionized last-mile delivery to customers with its 10-minute grocery delivery proposition, offering approximately 2,000 everyday items from chocolate to soft drinks, dairy to cleaning materials, and chips to pet food. Getir was founded in 2015 as the world's first ultrafast grocery delivery service in Istanbul and has grown rapidly in recent years.

Getir joins Gorillas and Buyk in using EV space as outposts... and there are others in NYC, like 1520, Fridge No More and JOKR.
In November, The New York Times reported on this app-based speedy delivery world.

Superfast grocery companies have their fans. Nick O'Keefe, a construction project manager who lives in the East Village of Manhattan, signed up for JOKR and Fridge No More in August and now says he may never go back to the supermarket. "The convenience of it far outweighs anything else," he said. "It's the future."
But the new services have drawn criticism. One concern is that they could siphon business away from local stores in a city where running to the corner bodega when you run out of orange juice or milk has long been a part of daily life. Some people also worry that online grocers will send more deliverers onto streets already crowded with food app workers racing to deliver takeout orders while they are still hot, or at least warm.

[Now-former Manhattan Borough President] Gale Brewer questioned whether companies were pushing the need for speed too far. "Who the hell needs an apple in 15 minutes?" she said. "If you want something in 15 minutes, go to the store."

Getir might not necessarily be in this space long-term. The six-story building, notable for being the source of a legal tussle between Raphael "I will bury you" Toledano and developer Michael Shah, has been on the sales market for nearly three years. The storefront previously housed some hot pot.
Posted by Grieve at 4:50 AM

They do have the SNAZZIEST get-up of all the delivery services I will give them that for sure..As a Pedestrian it's getting awfully CROWDED and Dangerous on the city's streets with all these Delivery Services whizzing to and fro just to deliver an Apple!

I can imagine the customers for this service, recently located young "adults" who have gym memberships or at least make a show of putting on the running gear most days. Due to the pandemic they most likely work from home, seldom put on real clothes but default to fleece while at home or when walking their pandemic pooch. Perhaps they wonder what is a fair tip for the delivery of a $2 apple perhaps they assume the tip is included. Real New Yorkers will stare down a morning fresh mound of asparagus waiting for a sign from the "freshest" bundle, this service is for "new" New Yorkers. These services undoubtedly employ and exploits undocumented workers. There is no other way this business model could work.

Hey negative nancies, why don't we celebrate one less vacant storefront and another form of employment for people?

I guess I'm really out of touch because I can't think of a single time I'd ever use a service like this unless maybe I was laid up with an injury/illness. I like to get out of the house and go to the grocery store and run into neighbors or acquaintances I haven't seen in a while. I also value the relationships I have with business owners and employees in the neighborhood.

If younger people really cared about inequality, they'd order directly from the restaurants as the working conditions for the delivery workers are awful.

They are taking over our sidewalks with their insane app-based lifestyles.

Tax it out of existence. $10 delivery fees. Require insurance and GPS on all delivery bikes. We citizens need to know who the people are blasting down our sidewalks. The City has madeit very difficult for the bikes by privatizing the gutters and filling them with private eating establishments many publicly traded on Wall Street.

Thank you @929am. The gross number assumptions, usually from the same folks over and over again, is amazing. It's actually gross. I agree there are far to many delivery bikes using the sidewalks.

Every one of you who is talking about how dangerous the delivery bikes are are insane. You do realize that cars kill about 150 people in New York city every year and bikes kill about zero. Zero. Not one. Every service that delivers by bike and not car I applaud and will direct my business too

1:54 The bikes are a MENACE to elderly people. We dont not have the FACILITY to jump out of the way of SPEEDING Bikes at our age. Why is it so hard to FATHOM that? In addition, I took it upon myself to correct your English:

I applaud and will direct my business 'to'.

If you actually cared about making streets safer you might want to direct your anger at cars blocking the box, running lights, speeding etc. I see cyclists ticked here all the time, I never see cars or trucks (again the vehicles that actually kill people) ticketed for anything other than parking.

The more bikes doing deliveries, and the fewer cars and box trucks, the safer we'll all be.

Regarding this service... it's great! I have a toddler at home, and when I run out of milk it's so nice to have them run up a few bottles and a bunch of fruit and other healthy snacks rather than trying to figure out how to get out of the house with the kid. The prices are reasonable, about what you pay in a bodega plus delivery tip.

Also, yeah, let's celebrate one less vacant storefront. And not only that but a storefront in this neighborhood that's not selling booze, a smoke shop, or a pizza or coffee shop? This is a useful service for folks like me who can't easily pop out to the store, and I hope they have all the success.

This business is not delivering restaurants food.

Please correct 1:04 for us as well

"blah-blah info". Love it.
Though hopefully that blah blah copy is paying a starving writer's rent.

the following statement should in no way be taken as a negative comment on this business operating at this address: I miss Shack's (sp)and Max's Daily 3pm Fresh roast Turkey

These businesses aren't taking away vacant storefronts, they're taking potential storefronts and turning them into warehouses. They may have cute names and branding, but they're worse than bank branches and Dunkin Donuts. At least those have a place people from the community can step into.

FWIW I'm in tech and normally download/use all the latest apps, but I don't agree with what these companies are doing.