A look inside Globe Slicers, one of the most unique storefronts on the Bowery 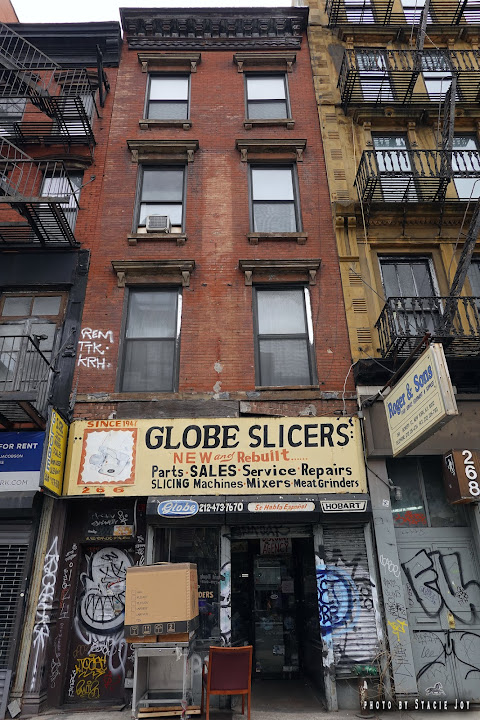 Photos by Stacie Joy
We've long been fascinated by Globe Slicers, which has been in business on the Bowery between Houston and Prince since 1947. (Happy 75th anniversary!)
And we've always wanted to stop in, but never got around to coming up with a cover story to shop for new or rebuilt slicers, mixers, grinders or other food-prep equipment ... 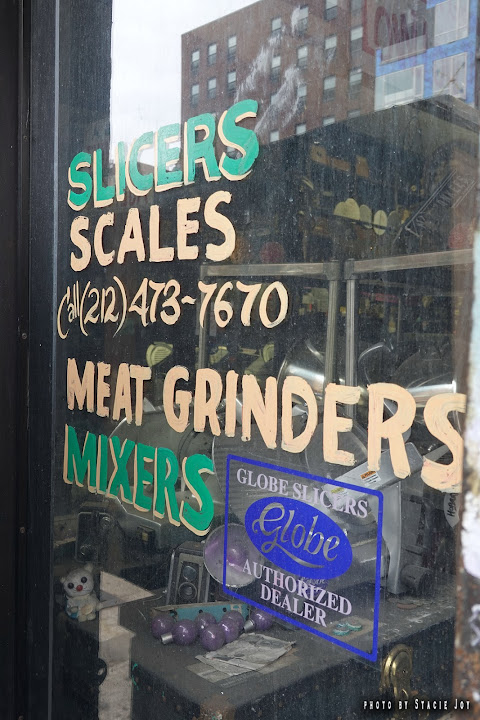 The folks here were nice enough to let EVG contributor Stacie Joy take some photos of the delightfully cluttered storefront... 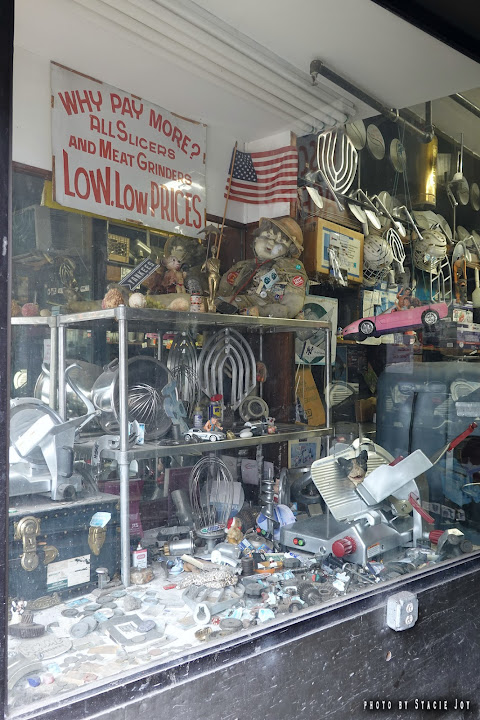 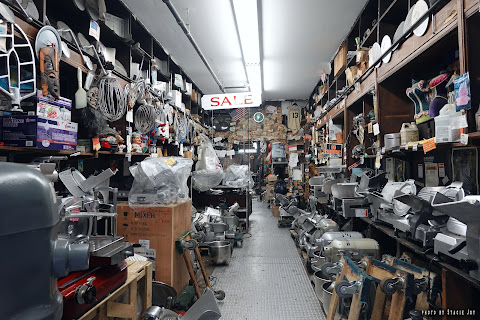 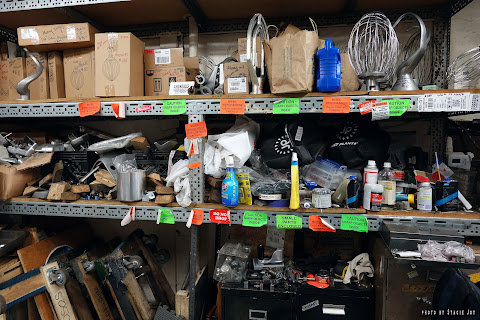 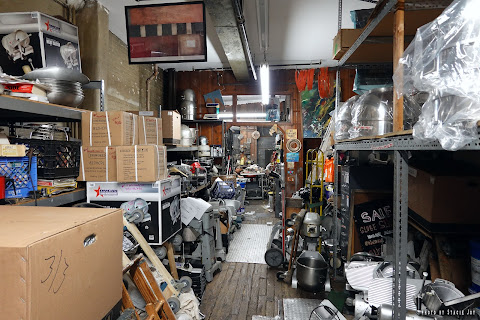 Oh, and what you came for... the slicers! 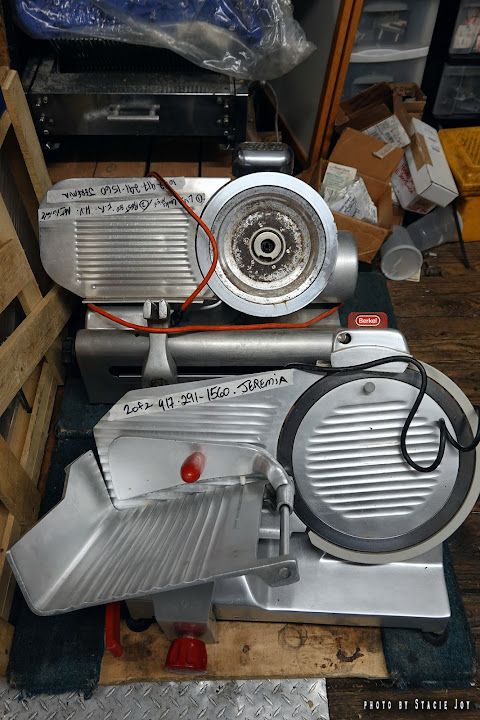 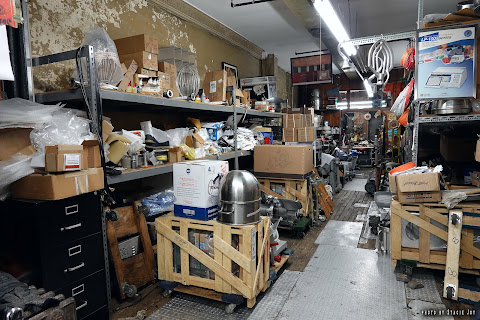 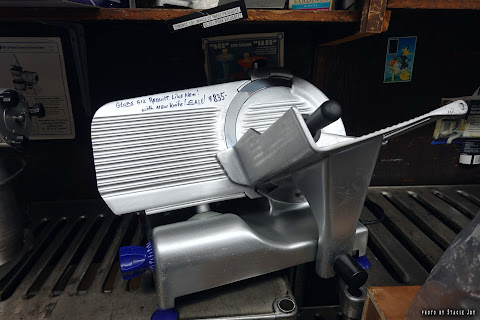 There are some quirky touches on the shelves ... 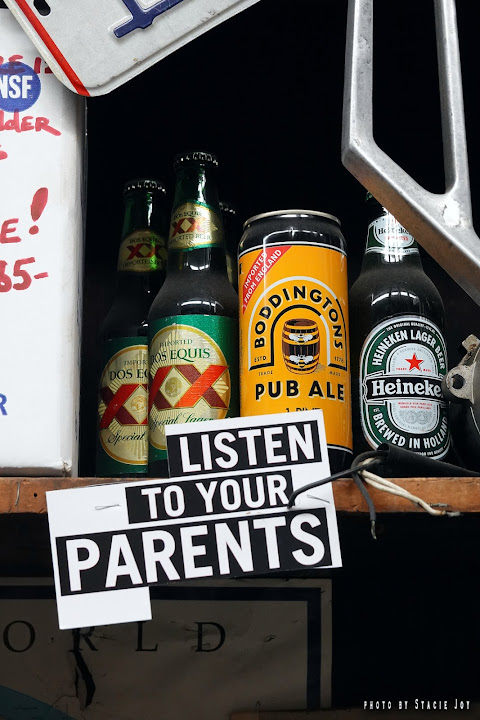 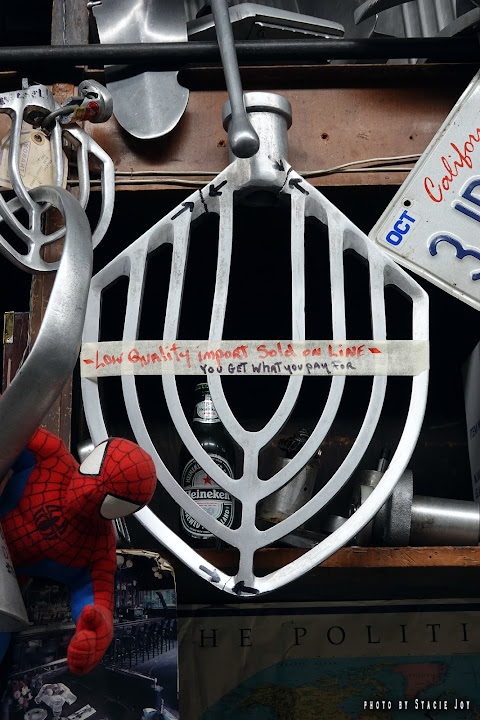 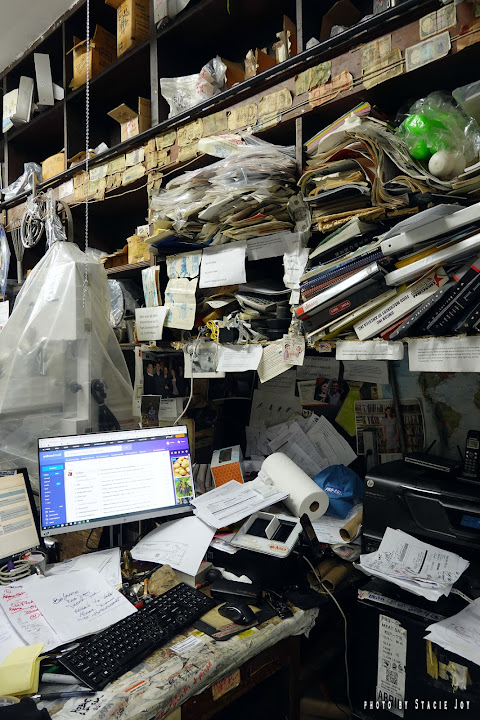 Dayton in Manhattan has an extensive history of the address dating to 1832 when dry-goods merchant Daniel C. Boughton lived here.

Within a decade it had been converted for business, with Holdridge & Co.'s drug company in the ground floor.  Among the items it marketed to pharmacists and direct users were the Dinner Pill, a "means of exterminating disease and promoting health," and "Dr. Taylor's original and genuine Balsam of Liverwort."

In the mid-1970s, the second-floor unit (aka, "The Blondie Loft") was home to Blondie's Debbie Harry and Chris Stein. At the same time, designer Stephen Sprouse lived on the top floor.
Updated: In the comments on Instagram, Chris Stein noted: "We occupied the whole upper building with a few other people. It was totally haunted. The first floor was a very ancient liquor store back then around 1975-6."
He also thought Globe Slicers moved to 266 from a nearby location after this time period.

266 Bowery today . The Blondie Loft where we put the 1st album together . pic.twitter.com/AhbV6ia3G5

This is fascinating, thank you. I've always wondered about that place, too.

Thank you for this, Stacie!

For years, my morning commute took me past the guys repairing slicers out front on the sidewalk. Chatting with them first thing in the morning was the highlight of my day. The Bowery has changed so much in the last several years, I'm so happy Globe Slicers is still kicking.

A relief to know places like this are still around! While most of NYC is getting lamer by the minute, spots like this prove that there is still the true character alive!

Lot of punk rock history on that stretch in the 1970's -Joey Ramone lived a few blocks north on 2nd St/Bowery. William S Burroughs lived in the "Bunker", a block south, at 222 Bowery. And Andy Warhol owned a building on Great Jones/ Bowery that would later become Jean -Michel Basquiat's art studio. Compared to today it was a relative small art and music scene but it was jam packed with a melange of stunningly original people.

Another fantastic report by Stacie Joy who is an EV treasure.

Thank you, Stacie! THIS is the "real" NYC, IMO.

I've passed there, but never had a reason to go inside, so this is a fascinating article! Long may they continue to thrive in this location.

Kate Millett lived at 295 Bowery for 38 years until the building was demolished.

Another relic that comes to mind is the shop Gizmo. It’s a sewing store on 1st avenue near 10th street. Not sure how long it’s been there but it’s another place from another time. The owner is a wonderful guy. And he offers a service that you just can’t find elsewhere in the hood. He repairs sewing machines, and sells all kinds of sewing needs.

@5:31pm: GIZMO is great! The owner is a very nice man, and he always seems to have what I need in terms of sewing supplies. That shop is another "REAL" piece of NYC!

Sorry to nitpick, but unique is unique. Something is either unique or it isn't, it can't be more unique or less unique!

Exactly how I always thought it would look like inside.

If something is unique, it has qualities which distinguish it from everything else. If something else has more distinctive qualities it is, logically, more unique.

Wow. Thanks for the interior photos. I used to walk by the exterior a lot one summer and they were always working on the sidewalk fixing the machines. But I never deigned to go inside. Interesting history. So Blondie members Debby and Chris lived there in the 1970s! So cool to know. And the business has been around for 75 years but not all at that location? Still, it looks like it could be 75 years.