After the fire: Double Down, Kelly's and Discovery Wines closed; grocery open

Things seem oddly normal tonight on Avenue A below Second Street...a few hours back, of course, some 180 firefighters were on the scene battling the blaze at 240 Houston and Avenue A...

On the east side of A between Second Street and Houston...the storefronts that were directly impacted by the fire... the Double Down looks open, but the sign on the door says otherwise... [Updated: Double Down was already closed for renovations before the fire.] 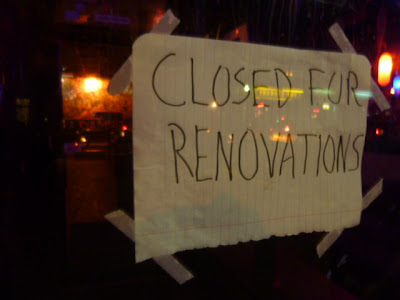 Kelly's and Discovery Wines are shuttered... 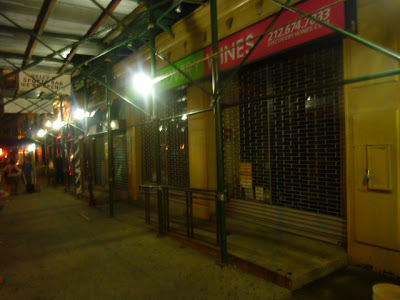 And, the one place that I thought would be closed, was open... Houston Deli & Grocery on the corner... According to the manager, "We were very lucky," he said. "But I don't know for how long. At any minute, water could come through the ceiling." 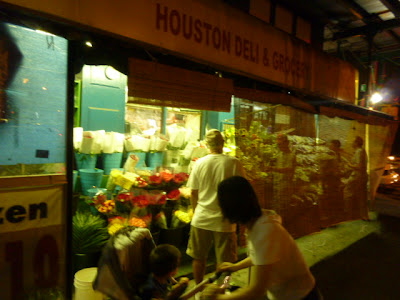 Meanwhile, at the entrance to 240 Houston, fire and Red Cross officials were on hand to help any displaced residents... 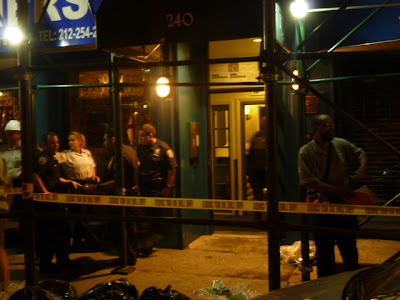 Previously on EV Grieve:
More on the fire at 240 Houston
Posted by Grieve at 10:04 PM

Love that deli (they are the only ones in the nabe that slice cheese as thin as I like it). Love Discovery, am connected to it via friends. Hope they both survive.

saw one of the guys from Discovery Wines in the store with 3 firefighters at around 7:30pm. Store looked fine. They were all inside for a while, then the Discovery guy came out and undid the padlock for the sidewalk basement; the firefighters looked down there a bit and came back up.

I was worried about the grocery. Glad to hear they're ok (and everyone else).

While watching the fire yesterday, I figured the whole building was a goner.... the firefighters really did amazing work...

Barbara, that's nice to read, thank you. We feel so very lucky to have only water damage and smoke odor.

We must have dumped over 300 gallons of water between last night and this afternoon - I've never been so happy about a leaking ceiling in all my life!

We've still got a lot of electrical work to straighten out, but we reopened at 5:30 tonight (Friday).

Best of luck to our displaced friends and neighbors and a big thank you to the firefighters who saved lives last night.

Thanks for letting us know, Tim. All the best to you and your neighbors.