Quote of the day: "Beer pong is not the Lower East Side" 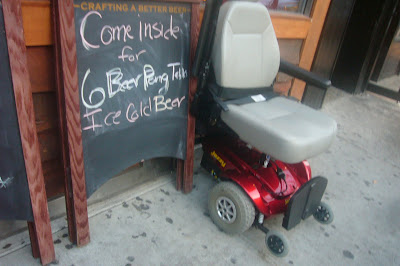 From a DNAinfo article by Patrick Hedlund on the proliferation of bars in areas other than Avenue A:

Just south of Avenue A, Ludlow Street on the Lower East Side counts 19 bars/restaurants on the three-block stretch between Houston and Delancey streets.

While many of these places have arrived without incident, a decidedly déclassé bar featuring drinking games doesn’t necessarily fit with everyone’s idea of a neighborhood pub.

“A frat bar is not representative of this once-bohemian neighborhood,” said Community Board 3 District Manager Susan Stetzer, a longtime East Villager who counts the proliferation of bars as one of the board’s most pressing issues.

“Beer pong is not the Lower East Side.”

Previously on EV Grieve:
Of the 147 storefronts on Avenue A, 70 of them are bars, restaurants or vacant

Photo by EV Grieve
Posted by Grieve at 1:20 PM

What's the snappy Hoveround for, ferrying boisterous partygoers back to the dorms after one too many shots?

While beer pong is not all of the Lower East Side, it certainly is part of it.

Don't fool yourself anon, beer pong is a game for dullards.

I'm not a fan of the frat bars either but maybe someone should remind the "Bohemians" that they, like many other groups of residents, were also once newcomers to the neighborhood.

Hey Jon, Do you understand the difference between "adding" to a neighborhood; and fucking-up a neighborhood?
As far as "Bohemians"; they have ben here as long as the Lower East Side has existed.

It sounds like you have never had a conversation with an old time "bohemian" (can quotes be sarcastic?) because those I know are not quite old enough to have dementia about who lived here when they moved in in the early 80's. And no, they weren't always here, it was distinctly and overwhelmingly Puerto Rican, in addition to large swaths of Ukranians and Eastern Europeans who had nothing to do with being "bohemian."

And, those that were active in the community were sensitive to not overshadow the cultural roots of those that were here before them. I'm sure it didn't always come through that way, but the earnestness was there.

Just last month there was a big broohaha in my garden about moving a rose bush that was planted by a founding mother, with the reminder to be respectful and thoughtful of what came before.

Please, before you make these weird judgments about people, try talking to them and find out what they actually think, instead of conjecturing. You might be surprised.