An EV Grieve reader noted that Taras Shevchenko Place, which runs alongside St. George's Ukrainian Church and the Cooper Union between Seventh Street and Sixth Street, has another name: Hall Place. Well, yes the Hall Place sign is new. 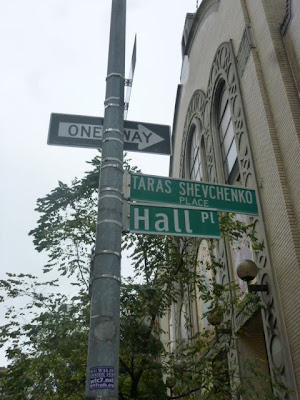 Back in 2001, Cooper Union officials had proposed de-mapping Taras Shevchenko Place, named for the Ukrainian poet, artist and activist. De-mapping would "remove the street from existence in all official matters, and from all official documents."

I lost track of that story... looks like Hall Place is sharing an existence with it for now.

According to Forgotten New York, City Council changed the name of Hall Place to Taras Shevchenko Place in 1978.

And who or what is Hall?

The street that now carries the name of Shevchenko, Ukraine's ''freedom symbol,'' was first known as Hall Street and then as Hall Place, after Charles Henry Hall, a Harlem landowner who sold the property to the city on Dec. 23, 1828.

Hall Place is covered in my book "Adventures in Ukrainian School," a look back at my childhood in the 50s and 60s on 6th and 7th Street. Will be covered in 'East Village Corner by Melanie'