From Naked Pizza to Joe's Pizza on East 14th Street 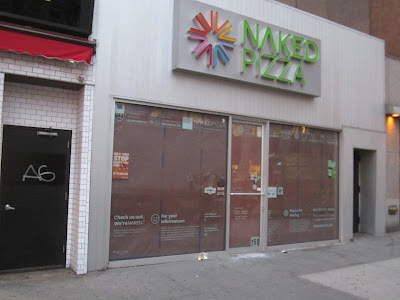 In recent months, we've noted for some reason that Naked Pizza on East 14th Street near Third Avenue has been closed ... turns out that's a permanent closure, though with a promise of a new location.

Meanwhile, The Daily Meal reports that the second location of Joe's Pizza will be taking over this space.

Here's what New York has to say about the Carmine Street pizzeria that has been around since 1975:

It's the epitome of what a slice is supposed to taste like: thin-crusted, with the proper balance of bold sauce and cheese that tastes like cheese, not rubber. Joe's also bakes Sicilian slices and pies, but he doesn't do fancy pie concoctions, heroes, garlic knots, or other diversions.

I've been a fan for a while. Their pizza is well worth walking to Washington Square for, but I'm glad it'll only be a few blocks now.

Wow, this is the best pizza news in a long long time. For the last few years its been bad times, nothing but lousy dollar pizza opening up everywhere. Joe's is the best slice joint in town. Looks like I can finally eat slices in my own neighborhood again. Thank Christ.

What all of the above said. Praise the pizza gods!