We had a post yesterday about 51 Astor Place, including quotes from developer Edward J. Minskoff from The Wall Street Journal. (Flashback: "it's great-looking, it fits in to the neighborhood, it's not overbearing.")

So, you know, at least one neighborhood blogger and several readers who just obviously don't appreciate great-looking architecture have dubbed 51 Astor Place the "Death Star."

Meanwhile! Turns out that this isn't the city's first Death Star... Crazy Eddie came across this Shorpy photo from 1902... 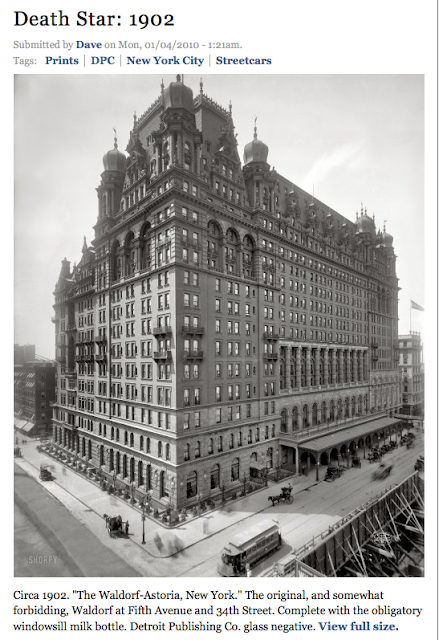 Per the caption, "The Waldorf-Astoria, New York." The original, and somewhat forbidding, Waldorf at Fifth Avenue and 34th Street. Complete with the obligatory windowsill milk bottle.

Of course, this Death Star had a short life... In 1929, the original Waldorf-Astoria was demolished to make way for something called the Empire State Building. (Did plans for that ever move forward?)

Not sure I'd describe that old Waldorf as a "Death Star." Maybe we can swap this out for 51 Astor? Dibs on the corner room at the top.
Posted by Grieve at 6:15 AM

Brrrr. Perfect for a Tim Burton remake of the Shining.

Far more attractive and welcoming than 51 Astor Place. I'll take it any day over that excrescence, which will never sport a humble milk bottle on one of its windowsills. Which it doesn't have anyway.

That building (the Waldorf-Astoria) is an absolute monstrosity. Good to see that horrible aesthetic design isn't a new phenomenon.

Wow! How do you just demolish a structure like that? Not only mentally (it's beautiful and must have been such process to build) but also physically, after it had stood for such a short time? Wild.